(Caption: The Steffen family, with Greg Steffen, speaking at left)

KIDRON, Ohio — The Steffen farm of eastern Wayne County is a family tradition — one that has been in the family for six generations and dates back to 1873.

But even so, each generation has made its own decision to keep the farm going, and how it should look.

Greg and Michelle Steffen, current operators, spent several years away from the farm before they decided to take it over. They held other, non-farming jobs and at one point, Greg was a soccer coach for Eastern Mennonite University, of Virginia.

Who all attended the annual Twilight Dairy Tour? Read more.

But the farm eventually called him home. It’s where he wanted to raise his kids, Elijah and Moriah, and it’s where his parents, John and Sharon Steffen, still lived and worked.

Greg spoke about his experience July 15 as he hosted the Twilight Dairy Tour — an annual gathering of 1,500 or so dairy producers and related industries. 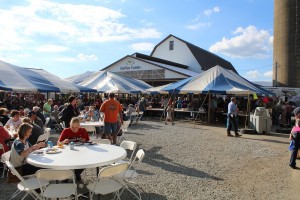 The transition was not easy, and the farm was in need of some updates.

“As we looked at taking over the farm, we knew that it was a big task ahead of us,” Greg said. “Michelle didn’t grow up on a farm, so she didn’t know quite what all she was in store for.”

But the two figured out a plan and stuck to it.

In 2008, they built a new 120-cow dairy barn that features a water-flush cleaning system, fans, a sprinkler system and 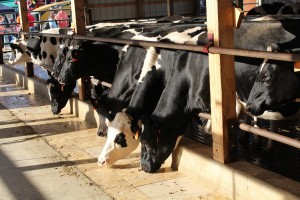 In 2012 they built a new calf barn that features removable panels to adjust pen size, a ventilation tube for air circulation above the calves, and special gates for easy bedding removal.

And, in 2013, they built a new heifer barn to raise the replacements. Today, they milk a herd of 120 cows, three times a day.

Greg and Michelle had mentors along the way, including Greg’s biggest mentors: his parents.

“Everything I know about farming, I learned from dad growing up here,” he said. 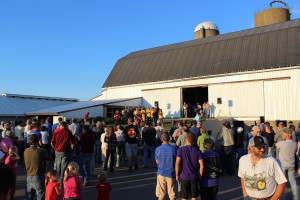 The neighbors have also been helpful, he said, and volunteered time to help set up for the tour — which takes many hours of planning.

Wayne County arguably has the strongest dairy industry in the state, and for sure holds the most milk cows of any county, at 32,500. The Kidron area, where the tour was held, is an agricultural community with a diversity of small and large farms.

“One of the reasons that we have what we have here today is because of my neighbors,” Greg said, adding that they “help each other out” during events like this.

The improvements have made a big difference in cow health and milk production.

Over the last five years, the herd has increased from a 20,000-pound rolling average, to 29,500 pounds today. The somatic cell county has dropped to an average that is usually below 100, and at the last sampling, the cows were averaging 103 pounds of milk per cow, per day.

As a former soccer coach, Greg compared his cows to athletes, saying they both need similar things.

“I know with athletes that if you keep them healthy, they perform very well,” he said. “And, it’s the same with the cows. If we feed them really well and have supporting staff that takes care of them well, the cows perform well.”

The Steffens also credit their ancestors for laying the foundation, and God for the “strength for each day and bright hope for tomorrow.”

During a prayer of thanks, Gene Miller, principal of Central Christian School, told the Steffens: “I eat because you work. You are indeed the backbone of our community.”

Tom Stocksdale, an ag lender with First National Bank, complimented the family for its “rich traditions” in Wayne County.

Those traditions started in 1873, when Johan Steffen moved to the farm from Switzerland. Greg’s parents operated the farm from 1969-2005, when Greg and Michelle took over the management.

This year, milk prices have been strong, as well as exports to other countries. Greg said his biggest goal going forward is to keep the cows comfortable and healthy, and to keep improving.

“We want to produce the highest quality milk we can, as efficiently as possible,” he said. 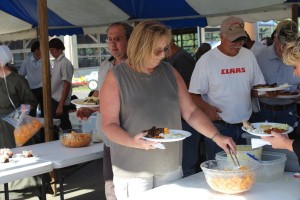 The tour included a buffet-style meal, prepared by the Hostetler family and various volunteers. Before and after the meal, visitors were encouraged to take self-guided tours of the new buildings, and to review the products and new farm equipment on display.

• A program for commodity producers is slated for Aug. 18 at the Ohio Agricultural Research and Development Center, and a program for dairy producers will be held Sept. 15, in the Shisler Center at OARDC.

• More details about these meetings are available on the OSU Extension-Wayne County website, at wayne.osu.edu.