SALEM, Ohio — Permitting is still moving slow in Ohio, but one county has definitely picked up the pace.

The Ohio Department of Natural Resources reported there were 17 new permits issued in Monroe County during May.

According to the ODNR data, five permits were issued in Washington Township to American Energy Utica, LLC. One permit was for the leg of a well already established and producing. The other four permits were for a separate well location, and the well is already in the drilling process.

Also in Monroe County, four permits were issued to Antero Resources Corporation for a well to be drilled in Franklin Township.

Eclipse Resources received four permits for a well site in Salem Township. Another well site is planned in Ohio Township and is to be drilled by Triad Hunter.

The ODNR issued six permits in both Harrison and Belmont counties.

In Harrison County, five of the permits were issued to American Energy Utica for the same property in Nottingham Township. According to the ODNR report, three of the wells are already being drilled.
Chesapeake Exploration received two permits for drilling in Harrison County on two different properties.

American Energy Utica received issued four permits for drilling in the Utica shale in Wheeling Township. All of the permits issued were for on the same piece of property.

Meanwhile, the ODNR issued three permits to XTO Energy for drilling on three different properties. The properties are located in Richland, Mead and Washington townships. 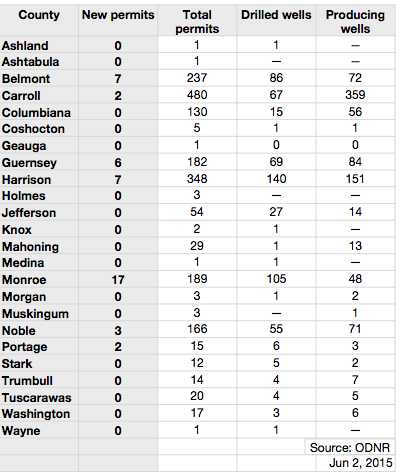 Three of the permits were issued for Londonderry Township. The final three were issued to Wills Township and are already in the drilling phase.

Both Portage and Carroll counties had two permits issued each.

In Portage County, both permits were issued to Chesapeake Exploration for well sites in Suffield and Freedom townships.

Carroll County may lead the state in the number of horizontal drilling permits to date, there were only two issued during May. The ODNR issued two permits for wells to R E Gas Development for a drilling site in Harrison Township.

In all, the ODNR reported there are now 1,926 horizontal permits issued. So far, 1,497 horizontal shale wells have been drilled.

The Pennsylvania Department of Environmental Protection issued 132 well permits during May and a total of 921 so far in 2015. In addition, the DEP reported 22 new unconventional shale wells were drilled during May.

The clear leader in the number of permits issued was Bradford County. The DEP issued 21 permits for new wells in Bradford County in May and 141 so far in 2015. There were three wells drilled in May.

Meanwhile, Washington County also appears to be gaining permits again. The DEP issued 19 permits for new wells during May, and the DEP has issued 152 permits since Jan. 1, 2015. The DEP report also showed that 22 unconventional wells were drilled during May 2015.
Greene County. Greene County wasn’t too far behind, with the DEP issuing 16 permits during May.

Meanwhile, the DEP has issued a total of 145 during 2015. The DEP reported there were seven wells drilled during May.

In Beaver County, the DEP issued six permits with four of them issued for the original drillers to drill deeper and two for new wells. The DEP has issued 17 well permits in the county during 2015.

And in Butler County, a total of seven permits were issued, with three for new wells and four for permission to drill deeper in existing wells. The DEP has issued 59 permits so far this year. The DEP reported there were three unconventional shale wells drilled during May.

The DEP issued two permits in Allegheny County during May and 15 so far in 2015.
There were no permits issued for Mercer or Lawrence County by the DEP during May.

The West Virginia Department of Environment Protection report shows that new well permits were issued in Brooke, Marshall and Tyler counties for new wells in the Marcellus shale.

In Brooke County, four permits were issued to the SWN Production Company, which appear to be set on the same piece of property owned by the same owner.

And in Marshall County, four permits were also issued by the West Virginia DEP. Two permits were issued to the Stone Energy Corporation. A single permit was issued to the Chevron Appalachia driller and one to the SWN Production Company.

The West Virginia DEP has issued six new permits in Tyler County during May.