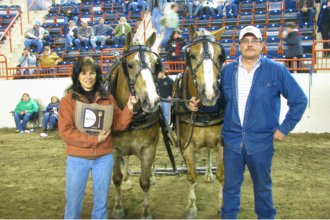 Owners Tim and Shelly Juart with their heavyweight winning team

HARRISBURG, Pa. — Tim Juart’s team of ponies pulled more than four tons of weight to win the heavyweight class in the pony pull at the 2012 Pennsylvania Farm Show.

Juart, from Smicksburg, Indiana County, had three chances to properly hitch his ponies to the weighted sled, then drive them as far as they could go. They pulled 8,100 pounds more than 13.5 feet.

Each team consisted of two ponies that were categorized into three weight classes according to the total team weight.

Once the ponies were properly hitched to the sled, a quick word from their driver sent them lunging forward. A team must pull the sled at least 13.5 feet to advance to the next round of increased weight on the sled.

Winners for each of the three classes are: