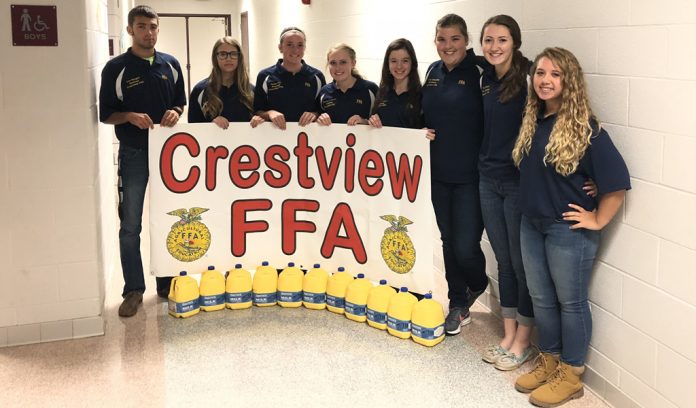 So far this school year, the chapter has competed in numerous career development events.

Overall, there where approximately 200 FFA members from Fayette and surrounding counties present for the competition.

Chapter members also traveled to the Ohio Statehouse Sept. 26 to participate in the Ohio Legislative Leadership Conference. During the event the members learned what role they can play in supporting agriculture legislation.

During lunch members had the opportunity to converse with members of the Ohio House of Representatives and the Ohio Senate.

MILLERSBURG, Ohio — John Hughes, active member in the West Holmes FFA, has been named a national finalist in the Dairy Entrepreneurship Proficiency Area. He will now compete at the National FFA Convention in Indianapolis, Indiana, starting with an interview process on October 25.

ASHLAND, Ohio — The Crestview FFA chapter was nominated by Warren FFA and Marion Local FFA to participate in the 10-gallon milk challenge. In the challenge, FFA chapters nominate each other to purchase 10 gallons of milk to support local dairy farmers. After purchasing the milk, the chapter then donates that milk to local charities.

Since The Crestview FFA chapter got nominated twice, members decided to purchase 20 gallons and then donated it to Harmony House for the Homeless and the Domestic Violence Shelter.

Third and fourth grade students from local school districts attended this event, where 29 interactive displays were set up to engage the students and provide them with knowledge of the agricultural industry.

FFA members in the Landscape and Greenhouse Management and Industrial Equipment Mechanics programs worked different stations throughout the fairgrounds. Each group spent approximately 6 minutes at each station, where they learned about crops, tractors, maple syrup, beef meat, dairy cattle, recycling, and composting; to name a few.

ALLIANCE, Ohio — Marlington FFA is holding a haunted school Oct. 19 from 5 to 10 p.m. at Marlington High School. Admission is $3 and proceeds go to Akron Children’s Hospital.

JEROMESVILLE, Ohio — Under the direction of Alyssa Crytzer, the Hillsdale FFA chapter conducted a community service project of donating all school supplies to the first-graders who attend Hillsdale Elementary.