LISBON, Ohio — It all started with 12 lambs Duane Miller brought home for his wife, Cynthia Koonce, to bottle feed and try to save and raise. In her kitchen.

Koonce operates Blue Heron Farm, located on 230 acres near Guilford Lake State Park in Columbiana County. It was the host site for the Ohio Sheep Day July 16 that drew more than 130 visitors from several states.

“I’ve always felt we needed to supply lamb all year long,” she said. She sells to Zrile Bros. Packing in West Middlesex, Pa., which moves some of her product locally as well as into the New York City market.

The couple had a small flock in Maryland before they moved to Ohio in 1992 with their daughter, Rebecca, and started back up with 35 sheep here. They bought their current farm in 1994, and Cynthia bought a couple flocks to increase their numbers, and then closed the flock.

Today she runs four rams — an Ile de France, Suffolk, Polypay and Dorset. The “short and chunky” Dorset is her ideal, but she’s added various genetics to develop certain traits and aseasonal breeding in the flock.

“I kind of play around with this,” she admits.

The bigger lambing is in March and April, which is more season that she’d like, but she has another lambing in late May/early June, and again in November/December. In the winter, ewes lamb in the barn; other seasons, the ewes lamb out on pasture whenever possible.

Koonce used to sell some as “hothouse” lambs, which are slaughtered at 40-60 pounds, but with the current high market prices, she now finishes most of her lambs.

In a continual management battle against parasites, Koonce keeps her replacement ewe lambs separate from the main flock on clean pastures, which the older ewes don’t use. Other lambs are kept in the barn for parasite control. They join the main flock when they’re just over a year old. She hasn’t wormed the flock in five years.

“It costs me more in terms of feed, but is it more expensive? Maybe not because of lower mortality and worm problems,” Koonce said.

There are about 130 acres in the pastures and hayfields — Koonce raises all her own hay. She stockpiles some round bales out in the fields to feed, and also has temporary storage in a greenhouse structure that also houses the flock at different times.

The land, which is mostly reclaimed mine land, has not been reseeded since the reclamation, and the grass species include white clover and trefoil. They’ve also worked to improve the farm, which was prone to erosion, wash-outs and hot spots where nothing would grow. And, being adjacent to the state park means the battle against multiflora rose is ongoing.

Koonce has also had to learn how to snare coyotes, which have been a problem on the farm over the years.

“It’s not always profitable,” she told the Sheep Day crowd, “but it allows me to keep this farm. 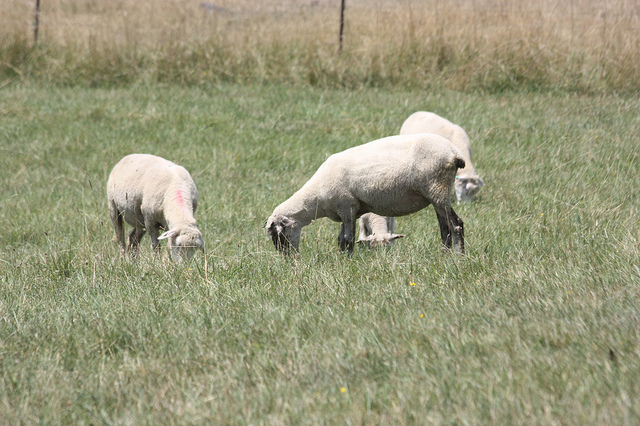