URBANA, Ill. — Dutchess was a six-month-old kitten when a fire destroyed her owners’ home in Saybrook, Ill., in September 2012. A firefighter found Dutchess hiding under the couch and pulled her out of the burning house to safety.

Within a few days it became clear Dutchess’s burns were very serious, and she was brought to the University of Illinois Veterinary Teaching Hospital, in Urbana.

Brittany Heggem Perry, a veterinarian completing a small animal emergency and critical care residency, has been involved in the care of Dutchess from the beginning and reflects on her case. 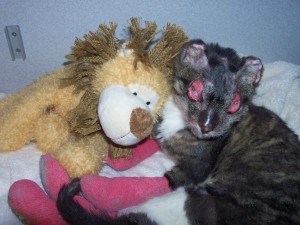 “Dutchess arrived with severe burns to her face, legs and all four of her feet. There were even pieces of plastic from her flea collar melted into her fur,” recalls Perry.

Dutchess’s care team of doctors said her prognosis was uncertain because such a large part of her body was badly burned. Along with her burns, Dutchess was having trouble just breathing.

“Throughout the process, Dutchess remained strong and sassy. She tolerated what we did to her and seemed to take everything in stride,” says Perry “The treatments were painful and we did our best to reduce the pain, but she really toughed out the roughest days and seemed to do well mentally.”

The initial treatment plan for Dutchess included an intravenous drip delivering continuous pain control and ointment for her eyes since the area around them was badly burned. Her wounds were gently bathed, and raw honey was used to treat them since honey has antibacterial and antifungal properties, stimulates tissue re-growth, and draws fluid out of the wound.

For a month the bandages on each of her legs had to be changed twice a day. She also received hydrotherapy on her legs with low pressure water to help remove the dead skin.

After a month of hospitalization, Dutchess’s burns were healing nicely, but she still needed more intensive care than her owners could provide, so her hospital stay continued, and she became a favorite of students and staff.

What’s more, through a Facebook page established by the firefighter who rescued her, Dutchess acquired thousands of admirers around the world who cheered her recovery and sent good wishes, cards and presents, and financial support for her treatment.

Meanwhile, Dutchess’s eyes needed lubricating ointment applied several times a day. She had difficulty walking because the skin that healed was tight and fresh, so it did not allow her to move her joints in full range. The areas where the skin fell off around her joints were replaced with scar tissue, which by its nature, does not have a lot of elasticity.

Through it all she continued to be an alert and cheerful patient.

“The skin on her paws had healed like mittens because her paws were contracted,” says Perry.

Finally at the end of January, after a four-month stay at the Veterinary Teaching Hospital, Dutchess went home. Because her original family was unable to keep her in their new housing situation, the firefighter who rescued Dutchess and had stayed involved in her treatment adopted her.

A few months after Dutchess was released from the hospital, she was readmitted for reconstructive surgery on her feet to separate her toes. Physical therapy followed her surgery to help her learn to walk again.

Dutchess was also having trouble with the skin around her eyes, which had been badly burned. The skin was pulled tight as it healed, and her eyelids inverted — turned inside out — giving her the appearance of wearing thick pink eyeliner. In July 2013, Dutchess returned for surgery to help release the tension of some of the skin around her eyes.

Because of the many veterinary students, doctors and staff at the hospital who helped care for her and the hundreds of donors who helped cover the costs of her care, Dutchess’s story has a happy ending.

She now spends her days playing with the two dogs and four other cats in her family and giving an occasional Facebook update to her thousands of followers around the world.