DETROIT — For the first time in the U.S., doctors at Henry Ford Hospital used a minimally invasive procedure to replace a failing, hard-to-reach heart valve with a new one — and placed it just outside the heart.

Due to prior medical procedures, the metro Detroit woman was not a candidate for traditional open heart surgery to replace her failing tricuspid valve.

One major U.S. medical center turned her down for treatment. Doctors at another said her only option was a heart transplant.

Henry Ford is the first hospital in the U.S. to perform the unique, transcatheter tricuspid valve replacement, which was pioneered in Germany.

The woman’s tricuspid valve, one of four valves that regulates blood flow in the heart, was replaced during the two-hour procedure July 31. The woman stayed five days in Henry Ford Hospital and was released to her home.

“There are a lot of people who have damage of the tricuspid valve, and the surgery is risky, so doctors just try to give them medical therapy,” says William O’Neill, M.D., medical director of Henry Ford’s Center for Structural Heart Disease and lead physician for the procedure.

“They get a lot of swelling and severe liver congestion. They’re in and out of the hospital, and it really causes a lot of morbitity. So there’s a huge, unmet clinical need. Individuals with this type of valve problem now have another option.”

Approximately 5 million people in the U.S. are diagnosed with heart valve disease annually. With an aging population that is often too frail for open-heart surgery, more than 20,000 Americans die of the disease each year, according to the American Heart Association.

More than 9,100 heart patients undergo tricuspid valve surgery in the U.S. annually, according to the Society of Thoracic Surgeons. 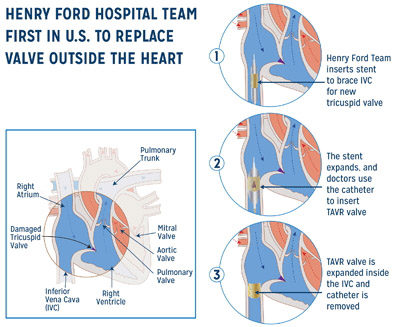 In the unique procedure at Henry Ford Hospital, O’Neill threaded a catheter through in a vein in the patient’s groin to her upper abdomen. There, he inserted the TAVR valve at the junction of the right atrium and the inferior vena cava (IVC), the main vein that brings deoxygenated blood back into the heart.

The Henry Ford team first braced the inside of the IVC with a metal, expandable stent. He then used the catheter to insert and expand a TAVR valve to fit snugly inside.

The team used 3D modeling to create a working replica of the patient’s heart, which helped them properly plan the procedure and choose an appropriately sized valve in advance.

Once deployed, the new valve stopped blood from leaking and pooling in the patient’s abdomen and lower extremities.

“There’s already a huge drop in the pressure in the abdomen,” Dr. O’Neill says.

Doctors monitored pressure through catheters inserted in the IVC above and below the new valve.