Princess and the Pauper 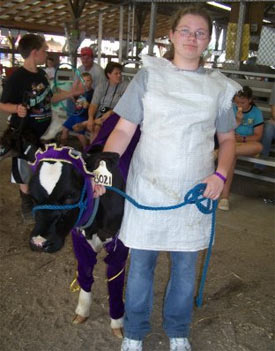 The large animal costume contest was held at the Harrison County Fair July 12. The award for most outstanding costume went to Samantha Craig, 12, a member of Buckeye Farmers 4-H club. She and her calf dressed as the Princess and the Pauper. The Harrison County Dairy Board presented a $50 award to Craig for her winning costume.

Drew Dawson, 10, as the Pharaoh and Cleopatra (Flashiest Costume)

Addie Caldwell, 5, and Lily Caldwell, 1, as Indians (Most Creative Costume)

Allison Dawson, 13, and her heifer as witches (Scariest Costume)

Grant Sproull, 9, and his goat dressed as hunters (Most Spectacular Costume)

Garrit Sproull, 13 and his goat as Biker Goat (Most Spectacular Costume second place)

Zack Jones, 11, and his lamb as Little Richard (Most Original Costume)