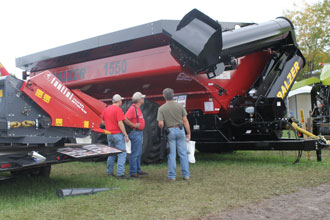 MILWAUKEE — Agricultural machinery manufacturers expect overall 2011 business to the U.S., Canada and worldwide to grow in the 6- to 7-percent range by year-end but then taper off 2012 through 2014, with exports sales anticipated to increase the most, according to the annual business “outlook” survey of the Association of Equipment Manufacturers (AEM).

Looking at combine and tractor sales for the U.S. and Canada, declines are mostly expected for combines; for four-wheel drive tractors, sales are expected to be stronger in 2011-2012 and then decline; and among 2 wheel drive tractors, business is predicted to grow the most overall for machines in the 40-100 HP range.

For other types of equipment, while there is a wide range in response, demand is expected to remain in the plus column for most products 2011 through 2014.

The survey asked respondents to rank how several factors would influence sales. Commodity prices were cited as a key positive factor, as well as interest rates and increased export demand.

Negative factors included the state of the general economy and steel prices.

AEM is the North American-based international trade group representing the off-road equipment manufacturing industry. Each year the association polls its agricultural equipment manufacturer members about anticipated sales of the machines and equipment that help farmers and ranchers produce the food to meet growing worldwide needs.

“Agricultural equipment manufacturers overall fared very well in an otherwise struggling economy. Recent growth has been positive in most categories, and exports to emerging countries are rebounding. Strong commodity demand and prices have translated into equipment sales. Net farm income is expected to be up 28 percent in 2011, and net cash income to grow nearly 19 percent,” stated Charlie O’Brien, AEM agriculture sector vice president.

“The general economy has stalled somewhat in recent months, and we are always aware of the potential for boom-and-bust cycles; manufacturers are assessing the business landscape for any possible slowdowns in domestic demand as well as overseas. Agricultural equipment plays a vital role in boosting productivity to meet the need to sustain a growing world population and the increasing prosperity of many countries. These are sound fundamentals for long-term business,” O’Brien said.

“We continue to push Congressional leaders to work together for passage of meaningful policies that strengthen manufacturing and create jobs. Our ‘I Make America’ grassroots effort has been successful with a focus on export-friendly policies that help U.S. farmers and manufacturers stay in business by selling their products internationally and a focus on adequate transportation funding to help them get goods to market more efficiently and safely.”

O’Brien added, “A thriving agricultural industry sets off a very positive ‘trickle down’ effect that plays an invaluable role in generating domestic jobs and revenue in the country. Job creation is still a major issue to help bolster the economy, and we plan to expand ‘I Make America’ to other industry issues such as the 2012 Farm Bill. We are facing an election year and a very divided and acrimonious Washington environment in which negotiations will take place.”