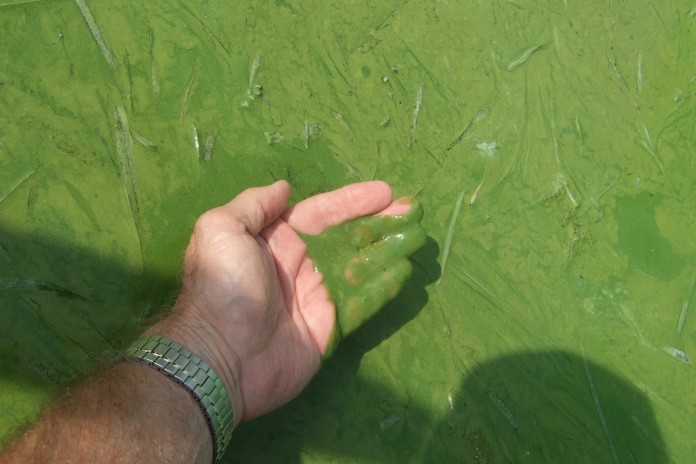 COLUMBUS — Harmful algae isn’t just a problem for high-profile bodies of water like Lake Erie — it could pose serious threats in small ponds and lakes as well.

A team of researchers from The Ohio State University examined water samples from two dozen ponds and small lakes in rural Ohio and found plenty of cause for concern, with particularly high levels of toxins at one lake.

Fertilizers common to agriculture — including nitrogen and phosphorous — create an environment in which harmful algae can flourish.

The researchers said the way farmers manage runoff could play a significant role in creating water bodies that are ripe for harmful algal blooms.

A primary concern is tile drainage, which removes excess water from the soil below the surface. That water — and the nutrients found in it — are rerouted, often toward ponds on farm property, said study co-author Seungjun Lee, a postdoctoral researcher in environmental health sciences at Ohio State.

“A lot of people and government agencies are paying attention to larger lakes, including Lake Erie, but these smaller bodies of water are also used for recreation, fishing and irrigation,” he said.

The research team, led by Ohio State’s Jiyoung Lee, analyzed samples from the 24 bodies of water over a three-month period in late summer 2015.

Ten of the sites had detectable levels of microcystins, toxins produced by freshwater cyanobacteria during algal blooms. One site had repeated instances of microcystin concentrations above recreational guidelines set by the Ohio Environmental Protection Agency, and so the research team paid particular attention to the samples from that site.

A pond or lake with high toxin levels presents a risk to people, pets, farm animals, wildlife (including fish) and crops and could benefit from routine monitoring and work to lower the risk of algal blooms, he said.

The researchers did not name the lake in question, because it is privately owned.

Toxins from algae can cause skin rashes, intestinal problems and damage to the liver and nervous system.

Jiyoung Lee said the impact of tile drainage may be elevated in small lakes and ponds, compared to larger lakes.

“Highly concentrated nutrients are being introduced into a smaller volume of water, making small lakes and ponds more sensitive to this influx of phosphorous, nitrogen and other nutrients,” she said.

Nitrate and phosphorous are linked to the primary type of toxic microcystin found in the water.

Judicious use of fertilizers could help control the algal blooms, as could measures to reduce animal waste contamination of ponds and lakes, Seungjun Lee said.

Researchers from Kenyon College also contributed to the study, which was partially funded by the Ohio Water Development Authority.