SALEM, Ohio — The Columbiana County Farm Bureau hosted their annual meeting Sept. 26 at the Winona Friends Church in Salem. The event served as a year-in-review and celebration of the past year’s activities.

She is the daughter of Kevin and Debra Baker and has three brothers; Kurt, Keith and Kaleb. Hudson was the 2006 Columbiana County Dairy Princess. This is where she got her start in promoting the dairy industry.

She was a 13 year member of 4-H, junior fairboard member and selected as the 2007 Columbiana County 4-H Queen.

After her high school graduation she went on to Youngstown State University to be a nurse, after just one year she decided the animals and farming were too dear to heart and started attending OSU ATI for dairy management.

While at ATI she did a project on how to mange a dairy processing plant. The idea gained momentum as she set up her virtual business. She headed back to the farm in 2010 to make it a reality.

Now she works with her family to manage and market Baker’s Golden Dairy. She has introduced customers to more than 30 flavors of milk and has added ice cream to the offerings.

Hudson has been educating and advocating in the community about dairy, giving tours of their dairy and speaking at various events to help people better understand the agricultural industry.

She married Jason Hudson in 2012 and they have a daughter Justyce, 3, and a son Jett, 6 months.

Hudson is happiest out in an open field on a tractor, she said. She brings her children to work with her every day and is proud to show them what farming and family is all about.

The county Farm Bureau hosted an event Sept. 9 at the Greenisen Farm, Farm to Forrest. The event was an eloquent dinner to support wildlife conservation and eating locally grown food.

About 100 people attended, plus the volunteers. Profits from the event were donated to Beaver Creek Wildlife Education Center. Phil Greenisen presented a check for $5,000 to Cathy Cattrell representing Beaver Creek.

Cattrell shared with the group that the education center started in 2002 as a 501c3 an has continued to grow, making two additions to their facility.

These funds will be used to renovate the oldest part of the building, making some capital improvements, Cattrell said.

The county will be represented by David Vollnogle, Phil Greenisen, Herb Eglie, and Andy and Danielle Burch at the 2018 state annual meeting.

Passing the gavel. Lastly, David Vollnogle was honored for his 5 years of service as the Columbiana County Farm Bureau president. He handed the gavel to incoming president Danielle Burch. 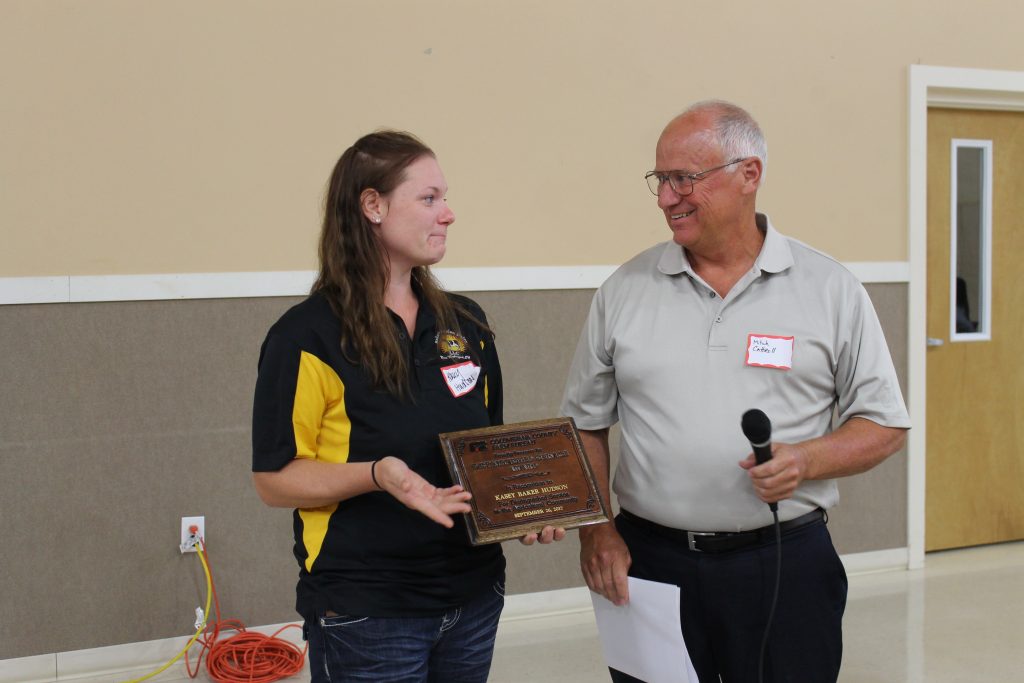 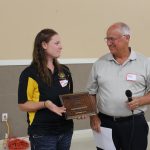 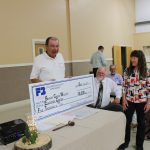 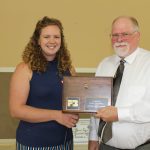 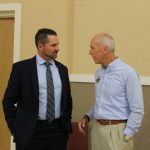 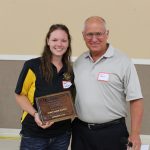 Kasey Hudson was honored as the 2017 Distinguished Service Award winner, presented to her by Dave Cattrell. (Katy Mumaw photo)