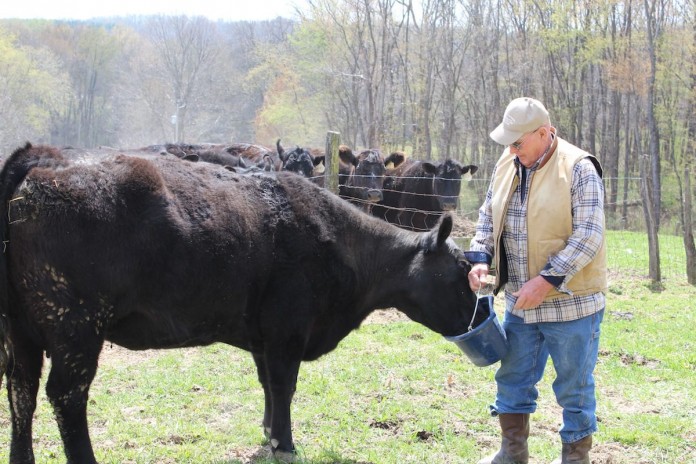 ZANESVILLE, Ohio — You have to watch your step at Bill Duncan’s Muskingum County house.

It’s not so much that you’ll be getting out of line — it’s that everywhere you walk — and sit — you’ll be surrounded by his collection.

Duncan, who is 75, has spent a lifetime collecting Oliver and Cockshutt toy tractors. The models, of which he has nearly 200, flood his cabinets and curios, tabletops and a good portion of his floor.

When you do find a place to sit, you’ll be surrounded by more models, pictures and farm equipment memorabilia.

“This is a man’s cave here,” he says, lightheartedly.

He admits, with a chuckle, that his “lady friend” Mary Jane Lowry, doesn’t always approve of the arrangement — which takes up a large part of his home. 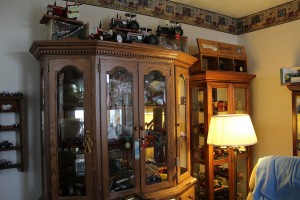 However, she does appreciate his passion for collecting, and the two work together on displays and traveling to various antiques shows.

Currently, the two are working on a large-scale diorama, spanning 8 feet by 8 feet, that features dozens of pieces of toy farm equipment, for a competition at the National Farm Toy Show in Dyersville, Iowa.

The contest will be held in November, and Duncan designed the display so it can be taken apart in sections, for what he hopes will be a smooth 650-mile trip.

This won’t be his first trip. In 2009, he won the show’s competition, and he’s made various other trips to Dyersville, where he has toy tractors on loan, inside the National Farm Toy Museum. 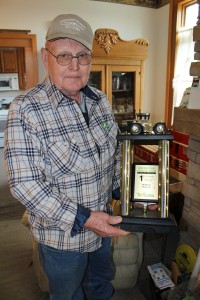 But as much as anything, Duncan just wants to enjoy the experience, and share his collection with others.

And, he’ll be continuing a tradition that he and his wife, the late Jean Duncan, enjoyed until her death in 2007.

Bill and Jean were married 47 years and both enjoyed collecting tractors — both toys and a few of the real ones. Jean even won a free Cockshutt 20 in a raffle at an event in Bluffton, Indiana, in 2004.

And half of what they did, aside from collecting, was farming and caring for their herd of Angus beef cattle. Last year, Bill’s herd was recognized by the American Angus Association as an Historic Angus Herd, meaning it has been registered in the family for 50 or more years. 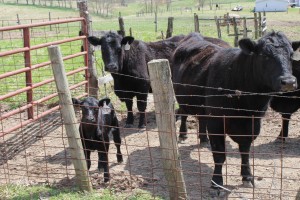 The herd, in fact, goes all the way back to 1949, when Bill got his first females as a 4-H project at Christmas.

He was about 10 at the time, and from there on, he showed at the Muskingum County Fair, kept breeding the herd, and he still has descendants of that original herd on his 100-acre farm.

He met his wife at the fair, as they both showed cattle. She showed Shorthorns, a much different breed than Angus, but “after we got married, she took to the Angus,” he said.

And, she also took to the tractors and Cockshutts, and all the other things Bill was involved with. He was a charter member of the International Cockshutt Club, and the two made trips around the country and to Canada, in the name of antique tractors.

Over the years, the herd and the tractors began to work together: People knew the Duncans for one thing or the other, or both things, and their names became very familiar. They moved a short distance to the farm where Bill now lives, in 1967, and continued to grow the herd, reaching 40 head. 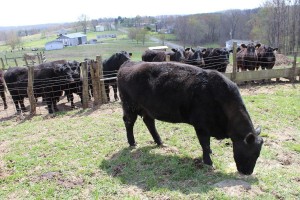 Today, the Duncans keep the herd steady at 15 head of breeding cows. Most of the calves are sold at the Barnesville Livestock Auction, with a few kept on the farm as replacements.

Bill’s son, Al, who is 51 and helps part-time on the farm, said he’s hopeful the family can keep the herd where it’s at or maybe add another five to 10 head in the future.

Growing up, Al said his dad was always a hard worker, and always into something new.

“He was never one to sit around and wait for anything,” Al said. “He was always doing something. If dad was sitting down in the house, he was almost always reading a magazine or a paper of some kind.”

One of Bill’s ongoing projects, in addition to the diorama, is a model Cockshutt manufacturing plant that he’s building out of Lego blocks, with wood shingles for the roof that he cut to fit by himself. There are more than 1,000 wooden shingles, all neatly placed. 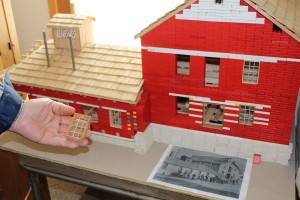 He designed his own plans for the plant, based on an historical picture of the original Cockshutt plant, which was located in Brantford, Ontario.

In a way, it shouldn’t be all that surprising that Bill would fall in love with Cockshutts.

His own father, Kenneth Duncan, worked in the parts and service department for the Muskingum County Farm Bureau, which, in the 1950s, sold Cockshutts.

Bill said he’s content to just keep his collection and his cattle herd at the size they’re at. If something special comes along, he might buy it, but right now he’s enjoying the chance to be free and do whatever he and Mary Jane want.

Most of the time, it’s “spur of the moment things,” he said, especially traveling. “We’re kind of ready, at the drop of a hat, to travel.”

Bill has dealt with some health issues the past few years. He still feeds his cattle by hand and is active on the farm, but some days can be a challenge.

At this stage of his life, he’s just happy to still be doing what he loves and to be sharing it with others.

“We’re not in charge,” he said, referring to his faith in God. “I thank the Lord every day for my girlfriend and everything else.”