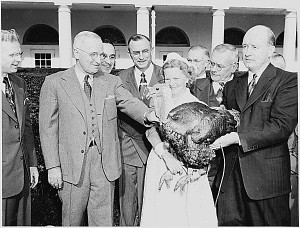 Washington — On Oct. 3, 1789, President George Washington issued a proclamation naming Thursday, Nov. 26, 1789, as an official holiday of “sincere and humble thanks.” The nation then celebrated its first Thanksgiving under its new Constitution.

It wasn’t until Oct. 3, 1863, that President Lincoln made the traditional Thanksgiving celebration a nationwide holiday to be commemorated each year on the fourth Thursday of November.

In the midst of a bloody Civil War, President Lincoln issued a Presidential Proclamation in which he enumerated the blessings of the American people and called upon his countrymen to “set apart and observe the last Thursday of November next, as a day of Thanksgiving and Praise.”

In 1939, President Franklin D. Roosevelt moved the holiday to the third Thursday of November to lengthen the Christmas shopping season and boost the economy, which was still recovering from the Depression.

This date change, which set off a national debate, was reversed in 1941 when Congress passed and President Roosevelt approved a joint house resolution establishing the fourth Thursday in November as Thanksgiving Day.

How to find, harvest and enjoy American persimmon