But the proper name, as posted on a sign out front, is now Three Rivers Energy, owned by Lakeview Energy of Chicago.

The previous owners, Coshocton Ethanol, operated the plant for about 10 months back in 2008. The plant has been dormant since, but on Oct. 15 corn and ethanol will flow once again.

Jim Galvin, CEO of Lakeview Energy, spent a recent morning telling Farm and Dairy about the re-opening and what farmers in that part of the state can expect.

Galvin, who grew up on a farm in Ireland, said the ethanol plant is actually in good shape, despite being closed for five years. He said the previous owners knew their stuff, but battled difficult price margins in 2008, as well as the many challenges of opening a new business.

Galvin has operated an ethanol plant in Plymouth County, Iowa, since about 2008 and has been in the renewable fuels industry for at least 16 years. He’s confident his company’s experience will mean good things for the Coshocton plant.

“The plant is going to be operating efficiently, up and down,” he said, adding the plant itself is “robust” and “in good order.” 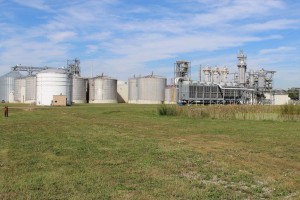 Three Rivers Energy has a staff of about 40, including a couple people who worked for the plant during the first ownership. Many are locals and some are also local farmers.

Commodities Manager Alan Brinker farms about 500 acres in the area and will be responsible for managing the marketing of distillers grain — the byproduct of producing ethanol.

He said his farm knowledge will allow him to connect with area farmers who will be selling corn to the plant, or buying distillers grains for their livestock rations.“I’m a farmer guy,” he said. “When I go home, I’m a farmer guy.”

The plant is expected to use about 36 million bushels of corn a year and produce 45 million gallons of ethanol. It will also produce 160,000-170,000 tons of distillers grain, in addition to corn oil and other byproducts. Grain will be transported by truck and by rail.

Ethanol critics. One of the biggest critics of ethanol production are livestock farmers, who sometimes argue that ethanol drives up the price of grain for their livestock by taking grain away from feed.

Galvin is certainly familiar with those concerns, but he said it’s important to remember that ethanol is just one product being made at a plant.

He said it’s also interesting to note the price of corn today — about $4.40 a bushel — compared to the price this time last year — above $7 per bushel.

Galvin is also looking into producing cellulosic ethanol, especially at his Iowa plant. Cellulosic ethanol is produced from wood and grasses, and could provide an alternative to using corn. 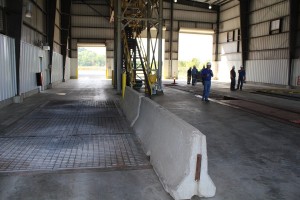 Another battle ethanol producers like Galvin face is the Renewable Fuel Standard. This hot topic centers around a federal EPA policy that mandates a minimum amount of renewable be blended into U.S. fuel supply annually.

The RFS currently requires 36 billion gallons of renewable fuel be blended by 2022.Galvin said the RFS is “a critically important roadmap” for the ethanol industry, but he said it’s not directly tied to profitability.

Still, the RFS is important. More than 95 percent of U.S. gasoline contains up to 10 percent ethanol, partly because of the RFS, according to the U.S. EPA.Galvin said a gallon of ethanol today is about $1 less than a gallon of gasoline. When blended with gasoline — even at 10 percent ethanol — “that’s bringing savings to the consumer at the pump.”

In addition to livestock farmers, the RFS is often a contentious issue among major oil producing companies. Galvin said it cuts into their share of the market, and they’re not happy.

With ethanol, he said the U.S. can use its own resources and produce its own fuel, keeping more dollars in the country and within a 70- to 80-mile radius.

“As a rural development policy, it’s (RFS) probably one of the most successful that (the United States) has ever seen,” he said.

Cheaper corn prices this fall will play into ethanol’s favor as plants pay less for their main ingredient. That will also mean more ethanol on the market.

“We will be seeing exports of ethanol again next year because it’s probably going to be the cheapest biofuel produced in the world next year,” Galvin said. “That’s massive for America.”