(Scroll to the bottom of this story for a slide show of photos.)

CADIZ, Ohio — Todd Kendle powered the International 856 down the pulling track July 9 at the Harrison County Fair, the first trip on the track for the totally rebuilt tractor.

Just 188 feet from the start line, a radiator hose came off, ending the tractor’s run.

After putting in 14-hour days on the tractor, Kendle was disgusted. “I really was hoping for it to go down the track.”

But it was one of the happiest nights of his life.

He hadn’t been feeling well for a couple weeks, recalls his father, Jon Jones, “but we had just put up 1,000 square bales of hay before the fair, and we thought maybe he had pulled a muscle.” Local doctors treated him for heartburn. But when his eyes turned yellow, Jon and his wife, Tina, knew it was something more serious.

Zack is a typical rural teen, interested in football, farming, his 4-H livestock projects, and tractor pulling. But instead of taking the football field with his eighth grade team at Union Local last fall, he was taking four rounds of chemotherapy.

An initial surgery on Dec. 1 removed three spots on his lungs that weren’t cancerous, but the major, eight-hour surgery to remove the tumor came on Dec. 7.

“They weren’t painting a real pretty picture,” Jon Jones said of the doctors at Children’s Hospital of Pittsburgh. In fact, they wouldn’t know until they saw the location of the tumor during surgery, that this would be a best-case scenario, and would not require a liver transplant.

They successfully removed the tumor and 5 percent of his liver. Then, it was back for two more rounds of chemo right after Christmas, followed by radiation, overlapping chemo and radiation for several days. He finished all the treatments in February. He’s been going back for monthly checkups since February, but no additional growths or signs of recurrence have appeared, and he feels healthy.

“He works hard,” said his uncle and Harrison County Fair board president Don Jones. “I don’t know how we would’ve got our hay done this spring without him.

Todd Kendle, who teaches agriculture and diesel technology at Buckeye Career Center in New Philadelphia, has known the Jones brothers for a long time, since they also share his love of education and youth. Don Jones is an ag teacher at the Harrison Central High School, and Jon teaches vo-ag at Union Local School District in Belmont County.

When he heard the news about Zack, Kendle knew he wanted to do something for him. Why not give him the pulling tractor he’s always dreamed of having?

He thought of his own two daughters — age 7 and 4 — “I know there’s people out there who would do it for me and my family.”

“I just wanted to help him.”

But the Jones family wasn’t sure it was a good idea. What if people got the wrong idea and thought donations given to the family for medical expenses were being used for the tractor. It took several months before Kendle could convince Jon and Tina Jones that he “needed” to do this for them.

They finally agreed at the beginning of February, and Kendle said within a week he had at least 50 donations. He found an International 856 online and called the owner in Indiana to say he’d take it for the $1,000 asking price. When the seller heard why he wanted the tractor, he told Kendle, “You come out to get it and you can have it for $500.”

“From that point on, it’s been an outpouring of help,” Kendle said.

The tractor was in rough shape, so Kendle, Kevin Hursey of Newcomerstown, and other volunteers totally disassembled the tractor and went to work putting it back together.

A turbo charger was donated, high performance gears went in the transmission, someone donated an engine, clutch and flywheel, sheet metal was donated, and an endless list of people worked on the tractor or donated to the effort. Kendle estimates there’s $40,000 of equipment and labor in rebuilding the tractor.

The pulling community wasn’t the only one supporting Zack and his family. Last October, as part of the national Make a Difference Day, Harrison County 4-H’ers put together an all-day benefit that raised more than $30,000 for the family’s medical expenses.

“It seemed like everyone in the county was there that day,” said event co-coordinator Janet Fenstamaker, who is also the adviser of Zack’s 4-H club, the Tri-County Showstoppers.

“And we didn’t have any problem getting anything,” for the fundraiser, she added. “There was not one person who said ‘no’ when it came time to doing the benefit.”

One of the items sold during that October fundraiser, and seen on several fair-goers Saturday, were T-shirts that incorporated a design by Zack’s younger brother, Cael. Cael drew a picture of a pulling tractor with the words “Pulling for Zack,” which became a rallying phrase for the Harrison County community.

Fenstamaker said the past 12 months have been an “inspirational year for everyone.”

“It’s made us realize how quickly life can change,” she said. “But it’s also good to live in a small county and a small community where people are willing to do anything for their neighbor.”

And Zack is trying, in a small way, to give something back to the communities who supported him this past year.

Todd and his crew were sweatin’ it, and barely finished painting the tractor the night before the fair pull. The next morning, they were back at it, finishing the sheet metal at noon. But they never had time to really give it a good run, so they worried what would happen when Todd drove it down the track for the first time.

They covered the painted lettering carefully with paper, and pull announcer Steve Cronebaugh told spectators a special promotional event would take place after the classic super stock tractor pull. After charging down the track for a full pull on his own tractor, Kendle jumped into the seat of the International for the last hook of the class.

Then came the dismal 188-foot run.

Undaunted, Kendle drove the tractor part-way up the track and parked it in front of the grandstand. Cronebaugh told an unsuspecting Zack to run the handheld microphone down to Kendle, and Kendle wouldn’t let Zack leave after taking the mic. 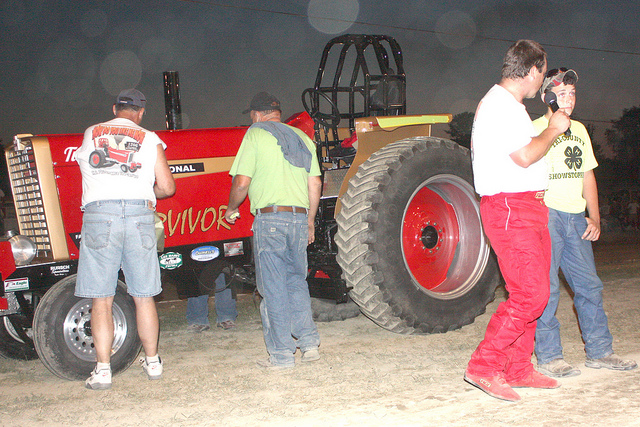 He turned them to face the grandstand crowd, while behind their backs, his crew quickly peeled off the paper on the tractor’s lettering and wiped it down.

“Do you believe in wishes coming true?” an emotional Kendle asked Zack, then turned him around to see the tractor that proves that they do. 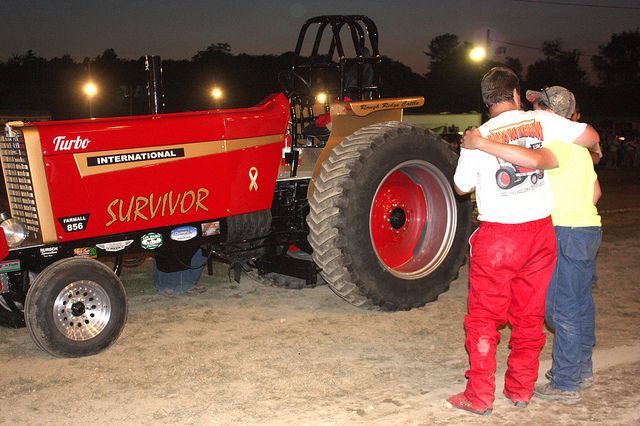 Much later that night, after another behind-the-scenes crew fixed the radiator hose, Kendle looked at Zack, who said, “Let’s pull it!”

This time down the track, Kendle drove the dream tractor to a 308-foot finish.

After all, the tractor had to live up to its name, too. 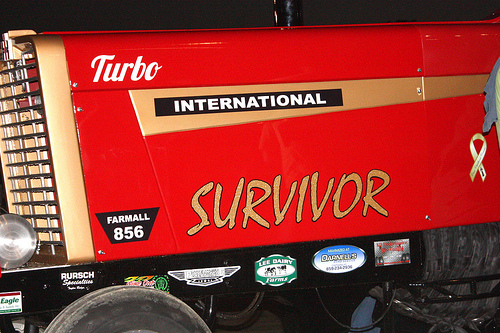