GENEVA, Ohio — The Farm and Dairy has played many roles in its 100 years of publication, but for one man, it may have been the stepping stone to a vineyard of his own.

Gene Sigel, owner of South River Vineyard in Geneva, was working on a doctorate dissertation in 1993-1994, when a Farm and Dairy classified ad caught his eye.

Sigel had graduated from Bradley University in Peoria, Illinois, and was studying economics and agriculture history at the University of Massachusetts, with the intention of teaching economics.

He moved home to Kent, Ohio, so he could work on the doctoral dissertation about the 1890s in Kansas, and his research included combing old newspapers.

But the research also prompted him to wonder what was happening currently in agriculture, which is why he picked up the Farm and Dairy.

Sigel was applying and interviewing for jobs at colleges across the country, but a “help wanted” ad from Chalet Debonne Madison, Ohio, in a March issue of the Farm and Dairy grabbed his attention.

“I was always interested in farming,” said Sigel. “However, I knew very little about grapes.”

Sigel said Chalet Debonne was looking for someone to expand its grape production.

The winery had been getting grapes from New York and Pennsylvania, but wanted to grow more local grapes. They wanted both college experience and mechanical skills, and Sigel brought both to the position.

“I was in the right place at the right time and I was full of ambition,” said Sigel.

Sigel said he never expected to own a vineyard or a winery, and had no idea how the wine industry would blossom. He estimates there were 40 wineries in Ohio when he began — today, there are 175 licensed wineries.

“I felt that was the grape industry was a good way to be involved in agriculture years ago, and I still do today,” said Sigel.

Once, he learned the basics, he leased two acres and put Riesling grapes in it. 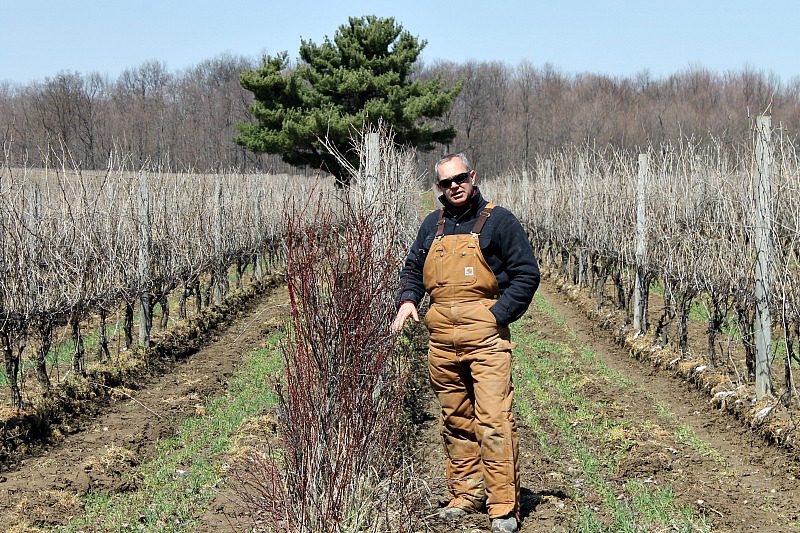 Sigel remains a vineyard manager with the Debevc family at Chalet Debonne, a relationship that helps both vineyards be more efficient and share costs.

“I was fortunate to develop a good partnership with the Chalet,” said Sigel, who credits many others in the wine community with helping him, as well.
When he purchased his first acreage, land cost $5,000 an acre. Now, it sells for $15,000 an acre.

“It worked out because people helped me,” said Sigel.
But he’s blunt that the wine business is not something most people can just walk into — it has to be thought of as a business.

“Luckily, it has added up and come together for me,” said Sigel.

He said the Chalet Debonne vineyards are spread over 12 miles in the Geneva area, which require different approaches to harvesting and growing grapes. That’s given Sigel knowledge he wouldn’t have learned otherwise.

Sigel said he may have been growing grapes for 20 years, but he has made wine only 20 times and every year means new lessons.

For one thing, his experience has taught him how important site selection is to growing grapes and the need for good air movement and drainage in order for grapevines to avoid frosts or cold weather damage.

Sigel said there are now five wind machines in his vineyards to prevent frost.
He said that when he started, most of the Lake and Ashtabula county area was planted in Concord grapes, grown under contract and processed into juices and jelly. However, in the past 20 years, there has been a shift in the type of grapes grown in the Geneva area. Today, most grapes grown are wine varieties.

Sigel said he knew from the beginning it was a gamble to plant and grow grapes, but it was one that he knew he wanted to try.

His winery now includes 60 acres of wine grapes that he has root grafted, which means taking material from wine grapevines and attaching it to Concord grape vines and getting it to grow.

However, Sigel said he has never experienced, in the last 20 years, as harsh a winter as this past year. Because Geneva is so close to Lake Erie, there is usually less chance of frost to damage the grapes after the blooms have started and the area benefits from a longer growing season.
But this past winter, even with wind machines, the cold was too much and damaged the grape vines.

He said 2013 was a great year for his business, but in 2014, he will be lucky to bring in $25,000 in income. However, the damage to the vineyards could be much worse, he added, and there is hope that there will still be a small crop, but it will also mean a change in the labor and pruning management for this year.

To improve grape production, Sigel utilizes vertical shoot positioning, which opens the fruit zone of the vine to get the most sun, which, in turn, creates flavor.
He’s also adding drainage tile to the vineyards, because he’s found that vines grown on well-drained soils produce better.

A team of researchers from Ohio State University found that the drainage tile even resulted in better sugar content and chemistry.

So in 1998, when he purchased his first farm, he started tiling and, years later, he continues to construct drainage tiles in new vineyards.

Today, Sigel thinks of that help wanted ad and can’t imagine another life.

“It’s been a lifestyle choice to be a wine farmer,” said Sigel.