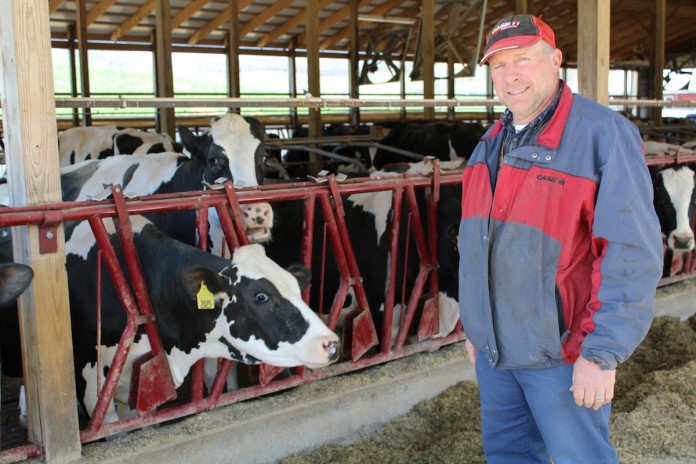 SUGARCREEK, Ohio — New buildings and more cow space have made a big difference the past few years at the Specht family dairy farm in Tuscarawas County.

The barns are not quite as large as you might see on a large commercial dairy, but they’ve made a big improvement the herd performance on this fourth-generation farm.

In 2010, the Spechts added on to their existing cow barn, and also remodeled the original part of the barn, with the goal of adding more space for the cows, more stalls and more comfort.

They did so by adding 124 additional freestalls, and making the freestall pens larger, increasing them to 4 feet wide by about 8.5 feet long, and adding water beds for the cows to lie down on.

Today, they have freestalls for about 320 head and are milking a little more than 300 head, with room to expand if they choose.

The Spechts are also in the process of constructing a new 250-by-60 maternity barn for dry and fresh cows. 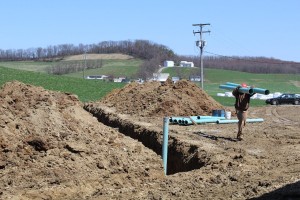 “With the extra number of cows that we had, they were having more calves and we were getting tight on room,” said Tim Specht, who farms alongside his brother, Brian, and their families.

Since the Spechts upgraded their buildings, they’ve noticed a response in the cows and in milk production. They went from a rolling herd average of about 26,000 pounds of milk to more than 30,000 pounds today.

“Just the comfort factor was a big thing,” Tim Specht said, “once they (cows) got spread out so that they had room and more comfort.”

The Specht farm was ranked second in the state for Holsteins in 2013, according to the Dairy Herd Improvement Cooperative of Ohio.

In 2013, their herd production averaged 29,717 pounds of milk; 1,239 pounds fat and 941 pounds protein, with energy corrected milk of 32,960 pounds. They also have several high-producing cows that are ranked near the top.

The new barns actually have narrower alleyways than before, but the cows are disturbed less because feeding is done on the outside of the alleys, and the barns make use of automated manure scrapers, which run 12 times a day.

This results in a cleaner barn, and greatly reduces the number of times farm workers have to go into the barn with equipment. The result is calmer cows, and greater production.

Chris Zoller, OSU Extension educator in Tuscarawas County, said the Spechts definitely gave their setup some careful planning, and made the most out of their situation, which included some challenges related to the grade and hillsides, and the location of the existing barns.

“They work hard and have done well and have managed that operation very well,” Zoller said.

He said the barns were beginning to get over-crowded, but the Spechts managed it well.

“They were always a good, high-producing herd and have seen the benefits of what they did,” Zoller said.

The Specht farm was started by Tim and Brian’s grandfather, Gust Specht, and was most recently managed by Tim’s father, Lowell, who died in March of 2013, at age 81.

Lowell Specht was heavily involved with the farm and the local farming community, including the Tuscarawas County Farm Bureau and the Ragersville Historical Society. He is survived by his wife, Johanne Specht.

Tim said the family is carrying on, but with a lasting effect of what Lowell and Gust left behind. One of the last things Lowell cared for was the bookwork, something Tim said he appreciates more now than he did at the time.

“I found out that takes a lot of time,” he said with a sigh.

Tim’s wife, Paula, fed the calves for 23 years and still helps on the farm. His son, Scott, handles the cow nutrition and mixing feeds, as well as field work. And Scott’s wife, Adriann, helps with herd checks and registering the calves. Tim’s other son, Greg Specht, a mechanic, helps part-time.

The Spechts keep and raise their own replacement heifers and send the bull calves to auction, usually the Sugarcreek Livestock Auction or the Farmerstown Auction.

They farm about 1,000 acres of owned and rented ground and produce all of their herd’s nutrition needs, except protein.

They’ve also learned to adapt to the growing conditions in their area, which includes a fair amount of former coal mine ground. Some of the ground is rocky and has very little topsoil, but on the plus side, it also drains and dries out fast.

The Spechts do well raising mixed hay in those fields, as well as forage sorghum. The sorghum the Spechts grow requires about a third the amount of water as corn, which allows it to do well in rockier ground.

In recent years, the farm has added some grasses to its alfalfa stand to increase the digestibility of the hay, reduce weed growth and because a mixed stand allows the farm to apply more manure to fields, without damaging the alfalfa. 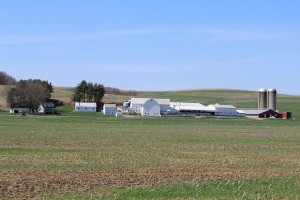 While there are some newer barns on the farm, the Spechts have also maintained and still use the older bank-style barns from his father and grandfather’s era.

All of the buildings are neatly painted and serve a variety of purposes, from heifer and calf housing, to equipment storage and shop space.