WEST SALEM, Ohio — Some college projects are just that — something you finish and present to meet the class requirements.

Other times, they’re the beginning of a new venture, a job or even a career.

For Wade Mahoney, of the Sunsational Oil Co. in Wayne County, Ohio, his 2008 college project has grown into 20-plus acres of sunflowers and a thriving oil enterprise.

While a student at the University of Akron, Mahoney, who is now 25, gave a speech about alternative fuels and biodiesel.
About this same time, he began making biodiesel and heating oil on the farm where he worked, Tegtmeier Cropland.

But Mahoney soon discovered he had more demand than supply. Weekly sales went from 200 gallons, to about 1,600 gallons — far more than he could produce with the oil he had.

“It got to the point where I got big enough that I couldn’t get enough,” he said.

So, he decided to grow a popular oilseed crop — sunflowers — and press them to make additional oil.

It was a new crop and a whole new experience. Mahoney started small, at just six acres, and learned as he went along.

“It’s not an easy process,” said Dave Tegtmeier, 59, Wade’s business partner. “All of these little things pop up.”

Those little things include weeds, birds, disease, variety selection, seed moisture and trying to get the crop harvested.

The first crop wasn’t harvested until the following March, six months later than Mahoney and Tegtmeier had planned. They harvested them with a combine and were left with only enough sunflowers to cover a single hay wagon, about a foot to a foot-and-a-half deep.

Every year since, though, the operation has improved and become more efficient.

Today, they’re growing between 20 and 30 acres of sunflowers each year. As for yield, they shoot for 1,600 pounds of seeds per acre, which will produce about 50 gallons of oil per acre.

However, their reason for growing the sunflowers today has changed. Instead of fuel, they’re using them for cooking oil.

When Mahoney started, the price for diesel fuel was near $5 a gallon and it made sense to explore the fuel use of the oil.

Now that diesel has come down in price (at least from what it was), most of the oil is sold for cooking.

To learn more about Sunsational Oil, visit their Facebook page.

The seeds are pressed for their oil on the farm, inside a pressing room built by Mahoney and Tegtmeier. They bottle most of the oil into 12.7-ounce glass bottles, and they also have 1- and 2.5-gallon containers for customers who need a little more.

Most of the oil is sold at niche markets like farmers markets and Local Roots in Wooster. It’s a little harder to compete in some of the bigger stores, but at the same time, the partners like to think Sunsational Oil offers some things other companies do not. 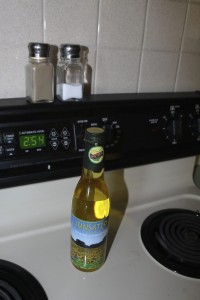 For one thing, all the work is done in a close-knit setting on the Tegtmeier farm.

Secondly, some companies use a chemical method to extract the oil, but the Tegtmeiers use a large, metal press that presses the oil manually.

And, unlike some companies, they don’t extract the Vitamin E from the oil. The vitamin E is valuable as an extract, but Sunsational Oil feels it adds value to the oil by leaving it in, and it saves the company from the costly process of extracting it.

Sunflower oil compares well to other cooking oils, and in many areas is as good or better.

One of the biggest advantages is that it’s hard to catch on fire, with a smoke point of 300 degrees or more.

Sunsational Oil produces as much oil as it has demand, and the rest of the seeds are used in birdseed.

Mahoney also operates his own birdseed business, Sunny Side Feeds, located on the same farm. He mixes sunflowers, and other types of seeds, to make birdseed.

Mahoney and the Tegtmeiers believe their operation to be one of — if not the only — of its kind in the eastern states.

The success of their sunflower crop is connected to their long-standing experience with agriculture in general. The Tegtmeiers currently farm about 1,000 acres of conventional crops, and 50 acres of pumpkins, in addition to the sunflowers.

Randy Tegtmeier, one of the partners on the crop production side of the farm, said the public is “fascinated” with the sunflower crop “because it is so different.”

Motorists often stop to take pictures and admire the sea of yellow that blooms during the late summer. Some even refer to it as “the happy field” because of the bright yellow colors, and the seemingly smiling heads of sunflowers.

To plant, the Tegtmeiers use the same planter they use to plant corn, but some adjustments are made to seed spacing and rates.

Randy Tegtmeier is a sales representative for Pioneer and they use Pioneer brand seeds. It’s important to use a variety that will grow tall, and be densely populated.

Taller plants will usually have smaller seed heads and be less susceptible to wind damage. Shorter varieties produce larger seed heads, but become heavier and more prone to falling over.

The Tegtmeiers have also found that the smaller sunflower heads dry out better.

“It’s challenging to harvest the larger heads because it’s soft in the middle, compared to the smaller heads, that dry out quicker in the fall,” Randy said.

The variety the farm plants usually grow 4-6 feet tall. They are planted in the spring or early summer, and can be planted as late as July 10 if used as a double crop.

The sunflowers are harvested in September through October, with the goal being to get them off before too much storm and pest damage arrives.

“You start getting into a balancing act between the birds and the wind and the storms,” Randy said. “You have to be aggressive.”

The farm recently bought a new head for the combine — a draper-style head — that  will do a better job of protecting the sunflowers as they’re harvested.

But Randy Tegtmeier is quick to point out, the sunflower business alone did not pay for the new part. Instead, the new head will serve to improve all the crops the farm harvests.

That’s basically how Mahoney and the Tegtmeiers treat the sunflower business. It’s an important part of the farm, but it’s not the main part.

Wade and Randy both work full-time on the farm, while Dave works as a multimedia technology coordinator for Ashland University.

There are various other Tegtmeiers involved with the crop farm, as well, including Randy’s uncle, Don; Randy’s father, Jim; and their families.

The sunflowers grow well in marginal ground and that’s typically where the Tegtmeiers put them — reserving the more fertile fields for cash crops like corn and soybeans.

But, they also stand ready to grow more sunflowers, if the demand grows. Each year they get a little better, from the field work to the oil pressing, and to the labeling and marketing of their product.

“We have enough skill sets now — that we know how to do it — we just need the sales,” Dave said.

And, like most farmers, their main focus is on producing better crops and managing the farm.

As Dave puts it, “we like to farm more than anything else.”