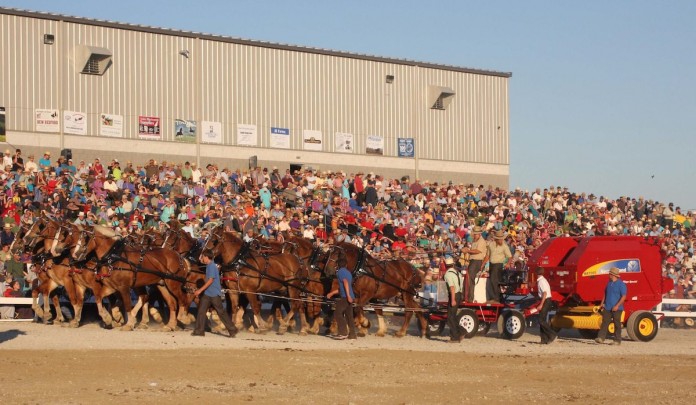 MT. HOPE, Ohio — Whether it was an old friend or a new idea, you found it at Horse Progress Days in Mt. Hope. Now in its 21st year and third time back in Ohio, the annual event drew more than 20,000 people from across the United States and from 16 different countries.

The host site is typically in a plain community.

“We rely on horses to operate the equipment, so we need good, well broke teams for the event,” said Mose Hershberger, one of the teamster coordinators. “Many of our equipment dealers travel several hours to come to the event with a new piece of equipment. They only have about two minutes to show and sell their product, so we want the team to be well broke and not spook when they are in a different situation.”

They also rely heavily on local equipment manufacturers and dealers to provide a line of the newest or most innovative equipment for area farmers.

Lowe and Young, of Wooster, has been making hay happen for area farmers since 1949 and has been heavily involved in Horse Progress Days since 1997. This year, they had 21 pieces of hay equipment, including mowers, rakes, balers, bale wrappers and skid loaders on display. 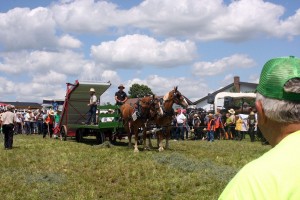 Jason Steiner, co-owner of the equipment dealership, admits it takes work to move the equipment to the site and make sure everything is working during the field demonstrations. But at the same time, it makes sense to be there.

“This is our territory, we need to take care of our customers,” he said.

Another factor, according to Steiner, is that the company has always had a good working relationship with Pioneer Equipment, of Dalton.

Milan Wengerd, of Pioneer Equipment, who was coordinating field demonstrations, agreed with Steiner that the event is a great opportunity for equipment dealers. Wengerd estimated there were between 150 to 200 pieces of equipment ranging from hay and tillage equipment to logging and produce equipment at the show.

Wengerd said from a marketing and advertising standpoint, Horse Progress Days is a great opportunity to reach their customers.

“The better our equipment works, the more likely customers are going to come see us and buy our equipment,” he said.

Wengerd said one of the biggest and most exciting changes he has seen in the show has been the innovation and improvement in the equipment. As manufacturers bring new equipment to the market, it’s being designed to last and to be easier to handle.

Wengerd said equipment manufacturers are also making improvements to the safety features on the equipment.

For example, the installation of guards on the rear and sides of their forecarts keep the operators from pitching forward or falling off the back into the machinery, if there is an accident. Improvements to the steering make it impossible for the equipment to jackknife on a steep slope.

“This is a great improvement if you are farming land with a lot of slope,” Wengerd said.

Another new feature is the addition of springs to the tongue and changes in the location of the tongue of the equipment, to keep the weight off the horses, or to keep the tongue from bruising the horse’s hocks.

Wengerd said another thing he is seeing is the reintroduction of older equipment, using new technology and new methods of manufacturing to build durable equipment for today’s farmers.

He said some of the more conservative groups continue to use the old technology, but it’s getting harder for them to find the equipment or even find parts to repair equipment they have.

“The old stuff is wearing out,” he said. “The new stuff has changed. We are using high-quality material and construction, so it will work better and last longer.”

Fred Finney, of Wooster, said one area that has seen tremendous growth in new equipment and innovative ideas has been with produce.

Finney told the group at the produce area that there is a definite need for produce equipment,  both new and the reintroduction of old equipment such as planters and potato harvesters.

But with the changes in technology and manufacturing, one thing has remained consistent for equipment manufacturers.

“We want our equipment to be user friendly,” Wengerd said. “If we design something and it has a feature our customers don’t like, we go back and improve it and make it better. We talk to the farmers using our equipment and we make adjustments and improvements. We learn as we go.”