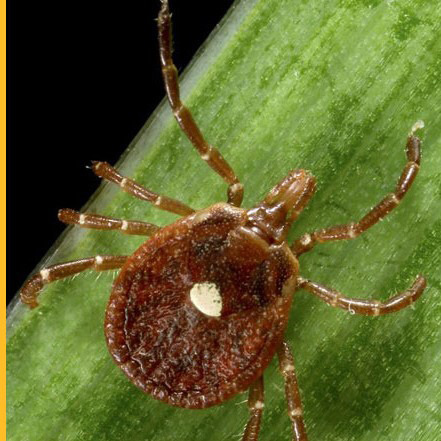 Q. Can some ticks cause you to be allergic to meat?

A. In some cases, yes. Spring marks the beginning of tick season and this year, the tick population is expected to surge. With it comes the potential for tick bites, which could result in several complications, including Lyme disease, Rocky Mountain spotted fever and in some cases, cause some people to develop an allergy to red meat after being bitten.

As mentioned in a previous Chow Line, lone star ticks in certain cases, can cause an allergy to red meat after being bitten by the tick. This species of tick entered Ohio over the last decade or so. It has since spread throughout the state, although it is more common in southern Ohio, said Tim McDermott, an educator with Ohio State University Extension.

While the lone star tick prefers a wooded habitat, in many cases, it can also be found along the perimeter of pasture and hay fields that extend into the grass, he said.

“It’s known to be an aggressive biter of humans, and while this tick isn’t known to vector or transmit Lyme disease, it can vector other diseases such as ehrlichiosis, southern tick associated-rash illness, tularemia, as well as some viral diseases,” McDermott said. “It has also been associated with causing an allergic syndrome in some people after being bitten.”

Already, some 34,000 people nationwide have tested positive for alpha-gal syndrome, according to a 2021 study published in the Annals of Allergy, Asthma & Immunology. According to a study by researchers with the National Institute of Allergy and Infectious Diseases, some people who have been bitten by a lone star tick have gone on to develop an allergy to eating red meat, and in some cases, dairy.

The study found that, in rare cases, some people have developed life-threatening allergic reactions to red meat after being bitten by a lone star tick. The study attributes the allergic reaction to galactose-alpha-1,3-galactose (alpha-gal), which is a type of sugar that some animals make in their bodies.

As a result, it’s found in red meats, including beef, pork and lamb, the exception being primates. According to published reports, humans don’t have alpha-gal, but they can have an immune response to it.

“If a person is bitten by the lone star tick and has an allergic reaction to the alpha-gal carbohydrate in the tick saliva, they can show food allergy symptoms including hives, itching, nausea, vomiting, diarrhea, and swelling, after eating mammalian muscle such as pork, beef, lamb, and venison,” McDermott said. “In severe cases, the individual may suffer anaphylactic shock, which is a life-threatening allergic reaction.”

While the association between lone star tick bites and the allergy are clear, more research is needed to understand why these alpha-gal allergies develop in some people and not in others, according to the study.

“In Ohio, ticks are most active from April through September, although they can be active any time of the year,” McDermott said. “The three most common ticks that can affect humans, companion animals, and livestock found in the Buckeye State include the blacklegged tick (also known as the deer tick), the American dog tick, and the lone star tick.”

To prevent tick bites when in areas where they may be active, McDermott recommend that you should wear light-colored clothes including a long-sleeved shirt tucked into your pants and long pants tucked into your socks or boots. Apply a tick repellent according to label instructions.

Wear footwear and clothing that have been treated correctly with permethrin. These can be purchased through many outfitters and clothing companies. Do frequent tick checks of your body while outside, and do a thorough inspection at shower time. Protect your pets with an anti-tick product recommended by a veterinarian. Keep dogs on a leash and avoid allowing them into weedy areas.

Do not crush or puncture a tick, if you find one attached. Instead, use pointy tweezers or a tick removal tool to carefully remove the tick by grasping the tick as close to your skin as possible and pulling it straight up with steady, even pressure. Then, disinfect the bite site, and wash your hands with soap and water. Save the tick for identification.

“Lastly, if you think you may have been exposed to a tick bite or if you show symptoms of alpha-gal allergy, contact your physician right away to get a diagnosis,” McDermott said.