Noble County also moved to the top of the list, with five permits issued in Enoch Township in January. All of them were issued to CNX Gas Co. LLC. In addition, a permit was also issued to Antero Reserve Appalachian Corporation in Beaver Township, according to the ODNR.

There were three permits issued in Columbiana County. Two permits were issued to well sites in Franklin and Center townships to Chesapeake Exploration. One permit was issued in Salem Township to the Hilcorp Energy Company.

Two separate companies received permits in Harrison County. Chesapeake Exploration received two permits in Stock Township and one in Moorefield Township.
According to the ODNR, in Short Creek Township, one permit was issued to Hess Ohio Resources.

In Belmont County, three permits were issued. Two in Washington Township were issued to Gulfport Energy Corporation and one in Richland Township to the Hess Ohio Development.

In Jefferson County, Chesapeake Exploration received permits for well sites in Springfield and Brush Creek townships.
One permit was issued in Mahoning County. The Hilcorp Energy Corporation received the go-ahead for a well site in Poland Township. 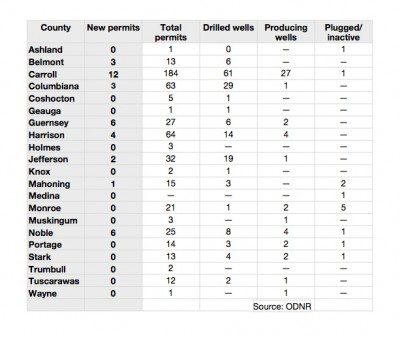 The Farm and Dairy was also able to obtain permit information for the month of January from the West Virginia Department of Environmental Protection on permits being issued for Marcellus shale wells.
According to the database on the West Virginia DEP website, there were no permits issued for well sites in Hancock County.

There was one permit issued to Chesapeake Appalachia,LLC., for a well slated to be located on Bethany College property in Brooke County.

In Ohio County, it appears four farms are going to be the site of four wells drilled there, according to the West Virginia DEP.  All four wells are being drilled by Chesapeake Appalachia, LLC.
Nine permits were issued to Gastar Exploration USA Inc. to drill in Marshall County. The wells will be drilled on property owned by the CNX Gas Company, LLC.
And in Wetzel County, there were five permits issued to the Stone Energy Corporation for wells to be drilled on property the company owns.

In Tyler County, six permits were issued to the driller Jay-Bee Oil and Gas on two different farms. One permit was also issued to Antero Resources Appalachian Corporation.

To compare the number of permits issued in January to December, click here.

Ohio Department of Agriculture changes H2Ohio deadline back to March 31