Amy Colpetzer, who farms with her husband, Tom, said the barn collapsed around 5:30 p.m. Tuesday from the weight of snow. As of March 4, she said at least seven cattle died, and about 15 remained in an intensive care unit, under veterinary supervision. 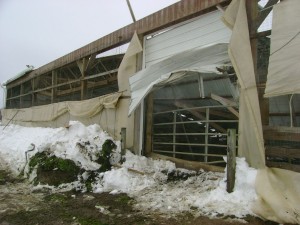 Colpetzer said the barn was in good condition and measured 200 by 110 feet, but part of the roof simply gave out.

“This was not a barn we were worried about,” she said, noting it was only nine years old.

The rescuers used a sled-type structure to glide the injured cattle out from the barn.

“Some were accessible, some were very injured and some of course died,” said Debbee Harold, a coordinator with the Mercer County Animal Response Team.

Harold said the sled is basically  a large plastic-type structure that supports the weight of the animals and glides over the ground — in this case the snow. Rescuers also have an aerial sling they can use to lift injured animals, if necessary.

The Mercer County team is part of the statewide Pennsylvania State Animal Response Team, a nonprofit. Volunteers are dispatched through the 911 system.

She said about 10 rescue team members helped at the Colpetzer farm, in addition to all the others.

She attributed the recent roof collapses to the “harsh winter,” and the fact that recent rainfall onto deep snow made the snow on roofs even heavier.

Colpetzer said multiple fire stations responded and that the volunteers were still unearthing cows — some that had only their legs visible.

She said the Mercer Livestock Auction has granted them use of their buildings, which are being used to house the surviving animals.

Joel Hersh, executive director of the statewide animal response organization, said each county either has its own team or serves the neighboring county. He said volunteers are trained in every type of animal rescue, from large to small.

During the early evening of March 3, about 200 cows were trapped inside a barn on Xanadu Jersey Farms, located in Perry Township, Mercer County, Pennsylvania, after the structure’s tin roof collapsed, WFMJ reports.

More than half of the barn’s roof collapsed, killing an estimated 20 cows. A structure collapse rescue team was present, and others worked to rescue the animals trapped inside the debris. Neighbors and volunteers came to help, too, showing a sense of community.