DALTON, Ohio — Organizers of the third annual Mid-Ohio Growers Meeting billed it as “down-to-earth education for the serious grower,” and that’s what growers got when they attended the two-day conference Jan. 8-9 in Dalton.

Growers came from across Ohio and from other states, braving frigid temperatures and hazardous weather that caused a noticeable decline in attendance on the second day. But those who made it learned about everything from insect and weed control, to food safety, and how to do a better job of growing and marketing produce.

In a panel discussion about operating costs and budgeting, local tax accountant Raymond Miller and Marlin Yoder, a produce grower from Indiana, challenged growers to do a better job of keeping records and tracking costs related to their business.

“I know produce farming is fun, but I don’t think most of you are doing it just for fun,” Miller said. “You do need to factor costs and actually know if you’re making money or not.”

Miller said farmers often fail to consider indirect costs that may be only on an occasional basis, like farm labor and horse labor — which is what most Amish growers use for field work.

Growers figure they use the horses for other things besides just the produce, and therefore often neglect to factor in the cost.

The same is true of tractors and automobiles or other equipment.

“Your team of horses will have to be paid for somehow, somewhere,” Miller said. “You use it for other things as well, but you will have to figure that cost into each crop that you use it for to get it paid for.”

As for farm labor and hours worked, Miller said farmers need to consider whether the produce operation pays as much to the family as the family could make by working off the farm.

But at the same time, he and Yoder agreed there is a “significant family value of working together that you can’t figure in … even if you don’t make quite as much as you would on (another) job.”

Miller said produce farmers should at least be doing yearly balance sheets, in which they list assets (things they own) and liabilities (things they owe), and the difference between those two things — their equity.

One of the featured speakers, hoophouse expert Adam Montri from Michigan State University, talked about the do’s and don’ts of growing through winter. He and his family operate a large-scale hoophouse farm in Michigan. 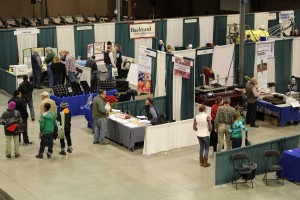 He said when it comes to design, he prefers east-west oriented structures, because they capture the most sunlight. And he prefers wider hoophouses to narrower ones, because most structures, no matter how wide they are, always have a foot or two on the sides where the produce under-performs.

The wider structures, which can be as wide as 35 feet, naturally provide more quality growing space.

Producers also need to consider the strength of the structure and all the weather issues it will face — like blowing wind and heavy snowfall. He recommends structures with strong diagonal braces to support rigidity, and strong end walls.

“Usually when they collapse it’s because the end walls aren’t that strong and things pull in from end to end,” he said.

His own hoophouses are designed wide enough so that he can drive a Kubota tractor and tiller down the center.

But he said producers should work with whatever they have. If they’re building new, it makes sense to choose the most ideal setup, but there are a lot of exceptions that can still work well.

He recommends visiting the Michigan State University hoophouse website, at www.hoophouse.msu.edu, where producers can enter their numbers into an online calculator and review related research.

While part of the goal of hoophouses is to raise the temperature during the winter, you also don’t want to create too warm of a growing environment, which may cause the plants to do well, but cause damage when cooler temperatures return at night.

On a 10- to 15-degree day outdoors, for example, the hoophouse temperature can climb to 65-70 degrees.

“We don’t want that,” he said. “That’s only going to stress our plants out.”

That’s why Montri recommends a good ventilating system, which keeps temperatures no higher than about 40-45 degrees. This also helps control humidity, which left unchecked, can lead to mold and fungal disease.

In one of the closing sessions, Mark McKinzie, organizer of the Tuscarawas Valley Farmers Market, discussed the issues communities face when opening and operating a farmers market.

This includes a management team, securing a market location, building a committed vendor and customer base, and creating a marketing strategy to reach customers.

He said one of the biggest issues is making sure the vendor and customer expectations are met, and providing consistency.

He said farmers markets also need to consider logistics like restrooms and electrical access, rent and upkeep of the facility.