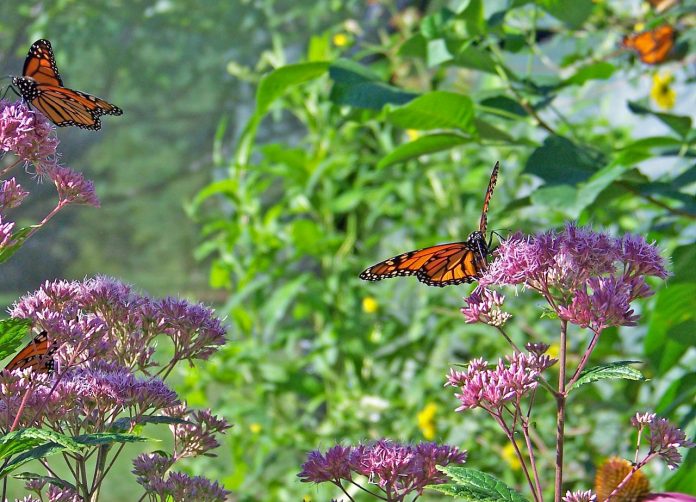 LEXINGTON, Ky. — Millions of people plant pollinator gardens to provide monarch butterflies with food along their annual migration from their overwintering sites in the highland forests of central Mexico to their summer breeding grounds in the United States and southern Canada.

For the first time, University of Kentucky entomologists have studied how effectively native milkweed cultivars in small gardens are at attracting and supporting monarchs. Their results suggest that this can be a valuable additional food source for these butterflies.

Plant cultivars are natural variants of native plants that have been deliberately collected, selected, cross-bred or hybridized for desirable traits that can be maintained through propagation.

Although experts generally discourage using cultivars for ecological restoration in natural habitats such as forests and wetlands, consumers find them attractive when seeking new plants that combine the attributes of natives and ornamentals. For the nursery industry, cultivars open the door to new introductions and vast market potential.

Most native plants sold at most garden centers are available only as cultivars as opposed to true or ”wild type” native species.

Adam Baker, an entomology doctoral student, and Daniel Potter, entomology professor in the UK College of Agriculture Food and Environment set out to find whether native milkweed cultivars planted by citizen ecologists were effective in helping to support declining monarch populations.

“Native milkweed cultivars including those selected for novel floral display, longer blooming duration, compact growth form and other consumer-attractive traits are increasingly available in wholesale nurseries and at local garden centers,” Baker said. “It is important to determine whether these cultivars have the same ability as wild-type native plants to attract monarchs and bees and contribute to effective ecological gardens.”

In the study, Baker, Potter and their collaborators planted six urban gardens, each containing two species of native wild-type milkweeds, swamp and butterfly, along with three cultivars of each species. They monitored them for monarch and bee visitation for two summers.

In both years, monarchs laid many more eggs on swamp milkweed than on butterfly milkweed, despite both species being equally suitable food for the caterpillars. In both milkweed species, they found the native cultivars were as attractive and suitable for monarchs as the respective wild-type counterparts from which those cultivars were derived.

“Previous research has shown that monarch butterflies tend to lay more eggs on taller milkweeds than on shorter ones,” Potter said. “We think that is what has happened in our study because swamp milkweed is significantly taller than butterfly milkweed, and probably easier for the egg-laying female monarchs to find.”

Milkweeds produce a lot of nectar, so besides monarchs they also attract and help to sustain native bees, honeybees, various butterflies and many other nectar-feeding insects. In the study, the scientists identified more than 2,400 bees, representing five bee families and 17 genera, visiting the milkweeds while they were in bloom.

Importantly, within each native milkweed species, the cultivars attracted similar bees as their native counterparts. Their study was published in the academic journal PeerJ and is available at peerj.com/articles/9823/.