ALLEDONIA, Ohio— Tucked away in Alledonia, Ohio, is a man with a passion for mustangs, not the hot rod type with horsepower under the hood, but the type that run wild in the western United States.

Nelson Lindsey got the bug for mustangs in the 1990s. He started researching the breed and immediately felt a connection so strong that he wanted to adopt a couple of them.

Lindsey went to Columbus in 1995 with a couple hundred dollars and drew a number. When his number came up, the mustangs he spotted were still available, so he gladly picked them from the pens and paid the $125 a horse, the Bureau of Land Management asked. His first round of adopted mustang stallions were less than one year old.

The BLM uses its adoption program as the primary tool to place these animals into private care. The horses and burros available for adoption come from overpopulated herd management areas where vegetation and water could become scarce if too many animals, including wildlife and livestock, use the area.

The adoption centers are set up across the country, where horse enthusiasts can come in check out what’s available, fill out paperwork, get a number to choose the horse they desire, then pay the $125 adoption fee.

A schedule of the dates and locations are available online.

Ownership after a year

After the one-year period, the adopter is eligible to receive title, or ownership, from the federal government, and the BLM no longer has any control over the animals. 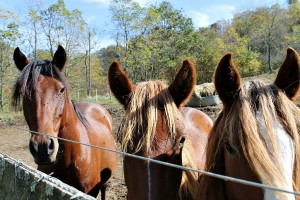 “It was a dream for me to get them, and I thought I was doing something good,” said Lindsey.

So Lindsey traveled to Bridgeport, W.Va., for another BLM auction a few months later. Once there, he spotted two mares he knew he had to add to his herd.

Today, his herd consists of 45 mustangs.

Lindsey, who’s had a lifelong interest in horses, said there’s “just something special about owning a mustang for me.”

He said when the first mustangs arrived at his farm, his family members took a liking to them and started to ride them without a problem. Family members continue to ride the horses today.

Lindsey owns 266 acres, so space has not been a problem as his herd has grown over the years.

However, as Lindsey recovers from getting a new hip, he is left with trying to find the mustangs new homes.

“They have given me such satisfaction. I have enjoyed watching them run free, just like they should,” said Lindsey.

Gorey said there is no re-homing program through the BLM after the one-year period. He said it is up to the owners to find the proper placement of the equines whether it be through a sale, rescue or another home of some type, just like other breeds.

But Lindsey is finding no one wants to take an interest in the mustangs.

“No one wants to preserve the breed. It’s our country’s history and no one cares. It make a person lose faith in humankind,” said Lindsey.

“I want people to enjoy them and give them a good home,” said Lindsey.

He added that the endurance the horses have as a result of living out on the range and their ability to be easily trained is what has made owning and breeding them worthwhile over the years.

“You can ride them all day long and they won’t break a sweat,” Lindsey said as he recounted some of his best days riding on his farm.