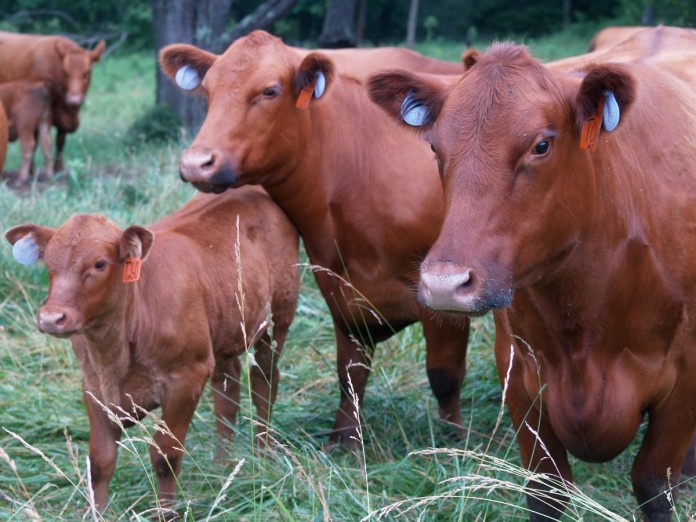 COLUMBUS — Cattlemen are going to be asked to cast a vote in a referendum on the Ohio Beef Checkoff in early 2014.

If passed, producers will double the payout from $1 to $2 per head when cattle are sold.

The Ohio Cattlemen’s Association has completed the first step in the process and collected the 1,000 signatures required to undergo a referendum on the Ohio Beef Checkoff.

Now all that is needed is a simple majority vote to get the referendum passed.

In simple terms, the referendum will ask producers to increase the state checkoff from $1 per head to $2 per head to support market research, promotion and education that aim to increase consumer demand for beef.

A similar referendum held in 2012 failed.

Previously for the measure to pass, two-thirds of the producers who voted, needed to vote in favor and represent a majority of the volume of the cattle produced in the preceding marketing year. A language update included in the state’s 2014-15 budget legislation changed what was needed for the referendum to pass.

All that is needed now is the simple majority vote (51 percent).

The Ohio Department of Agriculture will oversee the referendum process, which will lead to a vote in the first half of 2014.

The exact dates for voting haven’t been established.

According to Hawkins, the referendum package has been submitted to ODA for review and approval. The next step, once it is approved by the director, will be for it to be published, which then kicks off a 30-day comment period ending with a public hearing.

After that, the director will have to approve and adopt the package, and set the voting period. The voting time frame is generally determined by when the director approves the package for comment and when it is adopted.

The Ohio Beef Checkoff and referendum is regulated by the Ohio Revised Code under the Ohio Beef Marketing Program. Any producer among the more than 17,400 families that marketed cattle in Ohio in the last 12 months will be eligible to vote in the upcoming referendum, including youth who market 4-H and FFA beef projects.

Harsh said some things will be different this time around based on what the group learned in 2012.

She said OCA is going to work harder at being transparent, adding the OCA and Ohio Beef Council are dedicated to showing producers how the funds generated from the beef checkoff are spent.

She said the additional $1 that will be generated by the sale of each head of cattle will remain in Ohio.

“Currently, 50 cents of every dollar invested stays in Ohio, and the rest goes to support national beef checkoff programs, such as the ‘Beef. It’s What’s for Dinner’ campaign,” said Bill Sexten, Ohio Beef Council chairman, which oversees programs funded by the checkoff.

The national checkoff, which started in 1985, currently assesses $1 per head for each beef animal marketed. The checkoff has not increased since that time.

Harsh said one area where the money has been spent in the past year has been a new website for the Ohio Beef Council. It has areas for producers and consumers, answers producers’ questions and helps consumers connect to farmers.

Harsh said another lesson learned from the failed referendum is to get members out to do more to create awareness of why beef checkoff dollars are important.

“We have to do more, slow down, have a conversation and create awareness of what the beef checkoff dollars do here in Ohio. We need to make a case as to why these dollars are important and why we need them to educate consumers about beef,” said Harsh.

Currently, the OCA is searching for county coordinators to help get the word out about the referendum. Harsh said they will network across the state to help get producers out to vote.

“We have to rely on those with a passion for beef to help us get this done,” said Harsh.

The checkoff increase would generate a total of approximately $900,000 that would stay in Ohio. The Ohio Beef Council uses the money to make sure beef has a presence in Ohio’s schools, conduct more public relations outreach with Ohio food publications, directly connect with consumers through spokesperson training programs, provide nutrition seminars for health professionals and develop a greater statewide media presence through radio and print.

Harsh said the Ohio Cattlemen’s Association did initiate the referendum, however, the organization will not benefit from a checkoff increase.