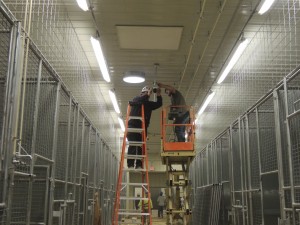 SALEM, Ohio — A new facility designed to hold dangerous wild animals ranging from venomous snakes to elephants, wolves and large cats was unveiled Feb. 28 at the Ohio Department of Agriculture.

One of its functions will be to house dangerous wild animals that are confiscated from owners who fail to register their animals after the Jan. 1, 2014 deadline. The facility will also be used to temporarily house any animals that are surrendered to the department.

New rules for owning these types of animals have been developed over the past couple years in the general assembly, as well as through work stakeholder work groups that have been meeting at ODA.

Erica Pitchford Hawkins, communications director, said the building is built to withstand high winds and inclement weather, and to safely house the many types of animals it could see.

It’s basically “a pole barn on steroids,” she said.

The Ohio General Assembly approved about $3.5 million for the project, which cost slightly less at about $2.8 million, she said. No funds were used from the ag department.

It includes 30 large animal enclosures, each equipped with heavy-duty wire and padlock. There are four small primate enclosures and a snake and reptile room. The building is surrounded by a 12-foot fence with a four-foot cantilever equipped with barbed wire and hot wire.

The building also features an advanced video surveillance system, with 17 360-degree cameras, and motion-sensitive cameras that will send instant photos to ODA staff, should an animal enter an unauthorized area.

Pitchford Hawkins said ODA has enough veterinarians on staff to handle current operations, but that discussions are being held with local zoos about the possibility of future staffing arrangements, as needed.

She said the number of staff in the building would depend on how many animals are being kept. All animal would be fed at least twice daily, she said, and their pens kept clean.

As of Feb. 28, there were 142 private owners registered to keep these types of animals, for a total of 360 animals.