JEROMESVILLE, Ohio — You don’t always have to grow up on a dairy farm to become a dairy farmer.

For Paul Keener, 26, dairy farming was a dream he had while in college. He graduated from Ohio State University in 2010, bought a farm and built his own dairy operation — a new parlor, cow barn, feed storage and everything that it takes to milk cows.

Keener does have some dairy experience in his extended background. His grandfather had been a dairy farmer and his dad, Bruce Keener, dairy farmed until 1988. But the younger Keener started anew just a couple years ago when he purchased a 153-acre farm in Ashland County, near Jeromesville.

He kept the same farm name his dad used — Rosedale Farms — but added almost everything else.

Today, he’s milking 284 head three times a day and has about 150 heifers that are raised on a separate farm. In the next three years, he hopes to expand to 600-700 head.

He holds a bachelor’s in ag business and applied economics. During college, he traveled to dairy farms and toured different facilities. He completed an internship on Air-Osa Dairy, a 2,000-cow dairy in California.

In one of his classes, he was required to design a dairy facility — a project that would prove beneficial when he would one day design his own facility.His first goal was to try and rent a dairy farm, using buildings that were already in place. But, he discovered that many of the farms he was trying to rent were outdated, with inefficient milking parlors and dairy systems.

So, he did the next best thing: He built his own dairy farm.

“Essentially, it was going to be either I do it or we don’t, and if we’re going to do it, we might as well do it right and go build it,” Paul Keener said. “Once we started, there wasn’t any turning back.”

Keener and his dad continued to travel Ohio and surrounding states, looking at different kinds of dairy farms. They asked questions and took note of what they liked.

They also relied on the knowledge of friends and customers they had made in the feed business. Bruce Keener operates a feed and grain mill known as Commodity Blenders in West Salem — about 20 minutes from his son’s dairy farm.

Paul considered buying a dairy farm in western Ohio, but he ultimately found one much closer. His dad had been visiting with a feed customer and learned the owner was interested in selling, but wanted the farm to remain in agriculture.

Paul improved the buildings already in place, and added many more. He had one old bank barn torn down, and turned the other into a calf barn. All of his major dairy barns were built new: a double-10 parallel parlor, commodity shed, two freestall barns and a manure lagoon.

The farm consists of 153 acres, plus another 25-acre tract and about 100 acres that Paul rents.

While there are many jobs on the farm, Paul focuses on managing the dairy. He hires out all of his field and crop work and buys hay from western states. His feed service naturally comes from his dad’s business — where Paul also works during the day.

He uses Genex to breed cows and Select Sires to breed heifers. His replacement heifers are raised and cared for by a local heifer producer. Altogether, he employs four full-time employees and two that are part-time. His mother, Deanna, helps with book work, and his sister, Ruth Ann, occasionally helps with milking.

Having other people involved helps delegate the work, and it helps different people to specialize in different areas.Asked what kind of farm equipment he runs, Paul says: “Very little.”

“You can get a lot of money tied up in equipment and then you only use it a few times a year,” he said.

He has an International 1486 that powers his feed mixer, a skid steer and some manure handling equipment, but not much else.

Since he designed his own facility, Paul was able to determine the size of pens he wanted, the way cows would flow through the barn and what kind of parlor and office space he would need.

He built his herd mostly from local Ohio Holstein producers who sold him groups of cows out of their own barns. His rolling herd average is an impressive 30,445 pounds of milk per cow, and his daily production per cow is now above 100 pounds.

In May, it will be two years since he started milking from this farm, and, like most farmers, he’s learning new things along the way.

“You learn about everything, but until you’re sitting there making the calls, it’s different,” he said.

Still, Paul’s planning has paid off and most big things have turned out as he planned.“It went pretty smooth starting up,” he said. “It could have gone a lot worse.”

One of his biggest successes so far — in addition to bringing a new farm into operation — is having such high-production cows. He attributes their production to good genetics, and also a well-balanced nutrition. 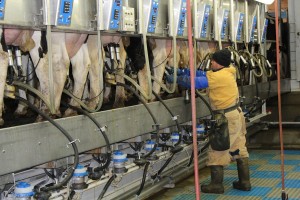 His nutritionist, Owen Mickley of Vita Plus, balances the rations based on amino acids, and makes changes “slowly and gradually.”

“Cows like to be bored to death with their feed,” Bruce Keener said. “So if we can do that, the (better) they will be.”

Paul does not yet have a family of his own, but is dating a farm girl from Mercer County: Olivia Houts. She occasionally helps with milking and various other farm chores.

He’s looking forward to producing milk in 2014, a year that already has strong returns, with feed prices that are becoming more affordable.

His advice to others who want to run a dairy farm?

His dad’s advice is “you can’t be afraid of hard work and you’ve got to work by the numbers.”

The Keeners said it’s also important to work with a banker who understands agriculture.