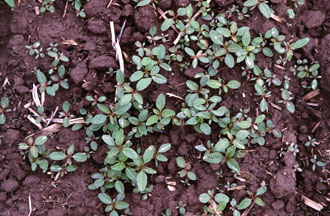 UNIVERSITY PARK, Pa. — The challenge of weeds that have become resistant to glyphosate — the active ingredient in Round-Up herbicide — has become an evolving national threat, with new challenges emerging and spreading annually.

At least three glyphosate-resistant species on the horizon for Pennsylvania require new strategies to combat them, according to a specialist in Penn State’s College of Agricultural Sciences.

Penn State Extension weed scientist Dwight Lingenfelter said several resistant species currently are approaching Pennsylvania. These weeds were controlled routinely over the years with glyphosate-based herbicide programs, but now the effectiveness of those programs is dwindling.

“There’s a species called Palmer pigweed or Palmer amaranth, which is a huge problem — especially in cotton-growing regions,” he said. “In the past, farmers were spending only maybe $20 to $30 an acre to control pigweed; now they’re up over $90 to $100 an acre, because of its resistance to a number of herbicide modes of action.

“Currently, we don’t have any major outbreaks of it in Pennsylvania, but we’re hearing reports from Delaware and Maryland that they’re starting to find Palmer pigweed, and it’s more than likely to creep into our cropping systems, especially in the southern tier of the state.”

Lingenfelter said a second resistant species slowly invading the state, water-hemp, already is creating big problems in the Midwest and South and is resistant to numerous herbicides as well.

“We had a person bring in a sample of water-hemp this summer, so we know there are some populations in our state currently,” he said. “We’re also seeing glyphosate-resistant species of horseweed or marestail spreading throughout the state — it’s very common in the mid-Atlantic region and Midwestern states.”

While it might sound like it’s losing its effectiveness, glyphosate is still vital in “burn-down” weed-control programs, which work by killing any vegetation on a treated field.

“It’s still a very effective herbicide for a number of species in our area,” he said. “It controls a number of weeds in the burn-down period and still is a foundation or backbone for many weed-control programs. We recommend using other herbicides in combination with it to control weeds that aren’t being controlled by glyphosate alone.

“We work with farmers to explain various programs that use different techniques and management options in a situation like that,” he said.

“Generally, we recommend that if you’re using glyphosate in the burn-down, you also should use something such as 2-4-D or a product like Valor XLT Sharpen prior to planting soybeans. We also encourage tank-mixing herbicides or using pre-packaged products so multiple modes of action are in the weed-control program.”

The mode of action is the way an herbicide affects the weed to kill it, Lingenfelter explained. “There are about 10 different major modes of action available, and you can combine those to get control of the particular species you’re going after. We highly recommend having at least two modes of action that act on that particular weed species.”

Newer herbicide products introduced in the last five years can help control resistant species in burn-down programs. But Lingenfelter pointed out that, while “new” products are being introduced on the market, the industry hasn’t produced a formulation that employs a new mode of action in more than 15 years.

“The reality is that many companies are repackaging products and giving them different trade names so it looks like we have a lot of new herbicides when in reality we do not. And if they were to discover a new mode of action in some lab today, we wouldn’t reap the benefits of it for at least 10 years, because it takes that long to get through all of the testing phases and field trials before it would hit the market.”

Lingenfelter said the diversity and rotation of crops grown in Pennsylvania gives it an advantage over states in the Midwest and South when it comes to fighting resistant weeds. Corn, cotton and soybeans are the primary field crops in the Midwest and South, and more than 90 percent of the acres are sprayed with glyphosate, so weeds are pushed to develop resistance.

“Here in Pennsylvania, we typically rotate between corn, soybeans, alfalfa, small grains and sometimes various vegetable crops, depending on the area of the state,” he said. “Because of this, we use a variety of weed-control methods. Not only does this allow for different herbicides and a rotation of herbicide modes of action, but it allows for other weed-management techniques — such as mowing forage crops or the addition of cover crops — and other cultural tactics such as variations in planting date, seeding rate or row spacing.

“We still use a lot of Round-Up-ready corn and soybeans, but glyphosate is not the primary means of control. Also, different types of weeds are common in different crops depending on life cycles and growth habit. Our diverse rotations should hold off resistance pretty well, but we’ll have to start thinking about different techniques to handle it.”

Lingenfelter said Pennsylvania growers can learn a lesson from watching the experience of their neighbors in states to the south and west.

“The majority of the resistance problem in these other regions is they were relying on a single mode of action — that being glyphosate.”