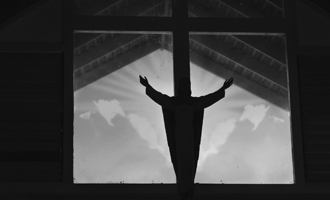 UNIVERSITY PARK, Pa. — A road trip across the U.S. to gather information for a book on religious faith steered two Penn State researchers through a spiritual landscape that was as diverse and vibrant as America’s scenery.

“It started out as a project to take pictures of churches, but we soon decided to tell the stories of the places and the people we saw,” said Roger Finke, professor of sociology and religious studies.Finke joined Christopher Scheitle, a doctoral candidate in sociology at Penn State at the time of the trip and now an assistant professor of sociology at College of Saint Benedict-Saint John’s University, on a car trip across the country in 2008.

They visited churches, Buddhist and Mormon temples, cathedrals, synagogues and mosques, and talked with the people who worship there. The researchers, who documented their journey in Places of Faith, a Road Trip Across America’s Religious Landscape (2012, Oxford University Press), experienced a few surprises during the trip that added a fresh perspective to their research.

During a visit to Houston, Finke and Scheitle toured the Lakewood Church, one of the nation’s largest mega-churches, led by pastor, author and television personality Joel Osteen. Under Osteen’s guidance, weekly attendance grew from 4,000 to 40,000 worshipers at the church, a former basketball stadium for the Houston Rockets.Finke said that the attendance did not surprise him, but he was impressed with the number of volunteers. The church employs about 350 workers, but relies on more than 5,000 volunteers to help with services each week.“What I really wasn’t expecting was how many volunteers help out with the services week in and week out,” Finke said. “I was also impressed with how the church handles those crowds, which, in some ways, reminded me of Disney World, which is very smart in how they control lines and crowds.”

According to Finke, the researchers outlined a rough itinerary for the trip and specifically selected several spots for their religious or spiritual significance. They visited most of those spots during a five-week excursion in a rented Dodge Charger.

Some of the stops included an orthodox Jewish synagogue in Brooklyn and a worship service at a Mormon ward — local congregation — in Washington Terrace, Utah.Finke and Scheitle allowed room for unexpected visits to religious sites. Those unexpected visits included a stop at a Cumberland, Md., church with an extensive tunnel system used in the Underground Railroad. They also visited a 300-foot tall, 180-ton marble statue of the Virgin Mary in Pine Bluffs, Wyo., and a cowboy church in Amarillo, Texas, which features a rodeo arena.

These sites showed the unique characteristics of religion in both urban and rural areas of the U.S., according to Finke. Although a few churches were initially hesitant to grant researchers access to their places of worship, most sites cooperated with the researchers, including several mosques in the Detroit area, according to Finke.

“The mosques in Detroit were very accommodating,” Finke said. “They really wanted to show people what was going on inside.”Detroit is home to one of the oldest, largest and most diverse populations of Muslims in the U.S. The Islamic Center of America, the largest mosque in the city, impressed the researchers.“Along the walls were two bands of gold Arabic writing — verses from the Qur’an, Islam’s sacred text,” the researchers said. “The floor is covered with a carpet with golden lines outlining the space where each person will sit or kneel during the gathering.”As a quantitative researcher more likely to use survey results and computer databases to conduct his studies, Finke said the trip added a new layer to his work.“The qualitative researchers always say that you need to hear the voice of the people for your study,” said Finke. “And there’s a lot of truth to that.”

Now is the time to plant bulbs