CANFIELD, Ohio — With a start in hogs, but his heart in the rodeo and cattle, Carroll Rowe made a leap of faith more than 40 years ago. He sold the hogs and went into the cattle business full time.

Today, Rowe, 76, has 40 cows in his herd and he sells feeder calves that are mostly Angus crosses. 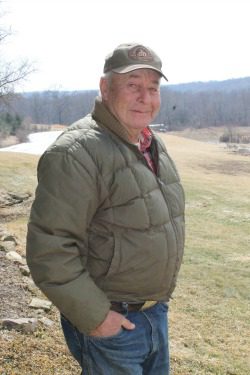 He purchased his Green Township farm in Mahoning County with his wife, Connie, in 1968. Hogs were his primary farm income, along with crop farming as much as possible on the 325-acre farm, but times were tough in the hog business. He said the profit margin was low and the interest rates on borrowing money to expand was too costly.

Rowe also had a small herd of Hereford cattle at the time, and had been raising cattle since he was in high school.

After Rowe decided to transition solely to cattle, he soon began breeding Brahman genetics into the herd.

Even today, Rowe describes the Brahman and Hereford cross as the “best cross ever.”

“I enjoy seeing how different breed genetics work together and what you come up with when you put them together,” said Rowe.

Wanting to breed the best cattle he could afford, Rowe was an early adopter of artificial insemination. He said the breeds he wanted were often unavailable in the area, so he developed a relationship with COBA Select Sires and he would get the semen he needed from them.

“I always had the opinion you don’t pay attention to the breeds or the color. I just wanted to improve the cattle,” said Rowe.

Rowe admits he’s had some trial and error in his breeding program. He tried to add Piedmontese genetics into his Hereford herd and that didn’t work out as well as he had hoped. He had seen the

Piedmontese breeds from Canada at the Denver stock show and thought it would make a good cross.

Instead, he found the Piedmontese cross to be the “worst cross” he created. Rowe said the cattle were double muscled and there was no marbling in the meat when it was processed. He added the meat did not have a good taste and compared the look of it to white meat similar to chicken.

He also dabbled in crossing Longhorn cattle with Angus because of the birthing ease they are known for and their lean meat. Rowe keeps some Longhorn-Angus cross cattle in his herd today.

His cattle operation wouldn’t be complete without his horses. He has worked cattle on horseback for years, including years working cattle at the Ravenna Arsenal in the 1960s when there was a cattle breeding operation there.

But meat wasn’t the only thing Rowe is known for producing in his cattle herd — he is also known for breeding bucking bulls.

He has been breeding rodeo stock since 1980 and has produced top bulls in the rodeos from NewYork to South Dakota. He got out of the bucking bull industry just last year.

He would breed his heifers to semen from bucking bulls who were making money on the rodeo circuit. He explained there are bloodlines that produce better bucking bulls. He said many of them were crossbred cattle but they had an instinct that was bred into them.

“There is a lot more people raising them than years ago, and therefore more are considered mediocre,” said Rowe.

He added by having more in the marketplace, fewer being considered good bucking bulls because what would have been top of the line years ago are now considered middle of the spectrum.

He isn’t the only rodeo competitor in the family. His three children —Sarah, Susan and Charlie — also participated in the high school rodeo, and Sarah and Susan went as far as to gain college scholarships for goat tying, barrel racing and breakaway roping.

He lost his daughter Susan to breast cancer, but Rowe is close with her two boys and one of them has picked up the rodeo sport. The youngest, Chance, 10, rides mini-bulls and has been invited to ride in the Professional Bull Riders event May 30-31 in Lima, Ohio.

Rowe’s son, Charlie also has two children, Aleesha and Carter, 9. Carter is also getting involved in the bull riding events.

Rowe has also served as a director for the National High School Rodeo Association and was called in to investigate whether or not an operation was acting humane toward rodeo animals. That work had him traveling to the western United States many times.

Rowe said his cattle and grandchildren are what keeps him going. He said even in the coldest weather this winter, it didn’t occur to him to be doing anything different than breeding and raising cattle.