SALEM, Ohio – Few organizations can boast having being in operation through 23 presidents, two economic depressions, and two world wars. Fewer still can effectively claim to still be “a happening place.”

Century House, an independent senior living home and Salem’s “best kept secret,” in the words of administrator Amy McGuire, is among those rare places that can declare both.

“I kind of look at it as their own apartment,” McGuire said of the current seven residents at Century House, which can accommodate up to 12 residents. “Being non-profit, we probably don’t do as much advertising as some other places, but our main problem is finding people. And we know they are out there.” 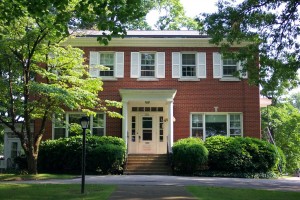 Since it is not a nursing or assisted living facility, residents at Century House must be able to largely care for themselves, though the dedicated staff is on hand at all times to assist residents.

“They do have a lot of independence,” McGuire said. “They can come and go as they please, and those with a driver’s license can have a car. And families are encouraged to stop in; families can have parties on our large deck, and things like that.”

Century House, at 1171 E. State St., was founded in 1887 as a home for aged women and is now home to both women and men, 55 years and older. The extended-family atmosphere, McGuire said, makes the house truly a home to its residents.

“Often elderly family members will say ‘I am not going into assisted living,’ But (Century House) can be a bridge so that they still maintain a lot of independence,” McGuire said.

Concerns with falls and diet are the two most common reasons people explore different living arrangements for an aging family member who lives alone.

“When a family member comes in, I always encourage them to take a tour or just bring (their loved one) in for lunch.”

Feedback can be immediate.

“They sometimes call right away and ask ‘when can I move in?’ And family members even say that they would like to live here,” McGuire laughed. “Even our lawn guys and phone guys say it’s like a trip back in time, and they ‘hate’ coming here because the food in the kitchen smells so good; most everything is homemade.”

Furthering the ambiance of home, McGuire said family members are encouraged to drop by anytime – much as they would if their loved one was still in their own house.

“We are so small, we are much like a family – and we become close not only with the residents, but their families,” McGuire said. “We want to get the families involved in a big way – even kids. That is why we started programs like our annual Christmas cookie party. Even if family members can pop in for five minutes – that coming and going makes it more like a home. And this is their home.”

Likewise, residents are encouraged to bring personal belongings, from furniture and family photos, “right down to their own salt and pepper shakers,” McGuire said. This can also help, she added, with the oftentimes uncomfortable transition of moving from a house that has been in the family for decades.

McGuire pointed to one resident’s son, who travels often for work but still finds time to swing by for a visit with his mother – and the kitchen staff. Another resident who invited her two daughters – who had been estranged from one another for some time – to an event and was thrilled to have the first family portrait in 15 years taken.

“What is really important – whether this is their last home or not – is for it to be a happy time for them and to still find joy in life,” McGuire said. “Just because you are 80 doesn’t mean you can’t enjoy a good barbecue.”

Through both talking to residents and their families, and her own community outreach efforts – such as inviting elderly community members to Century Home events – McGuire said she knows there are a great number of people who could benefit from Century House – those who want to remain on their own, but are finding the very independence they seek can cause them to become even more isolated from society.

“No matter how you look at it, or what the place is, it is about aging and you have to deal with that,” McGuire said. “I spoke with one lady, who was in her 90s, and she told me that all her friends were gone and she was lonely.”

Century House’s nostalgic yet innovative environment – for instance, Wi-Fi was added when a particularly computer savvy resident moved in – along with its comparatively cost effective $850 per-month rent – sets the home well apart from other senior independent-living communities, McGuire said.

“Some residents have not been exposed to a lot of these things and I love to bring those things to them,” McGuire said. “We do so much for them, but they do so much for us as well.”

She added that Century House also attracts younger seniors who are not thinking of a “retirement home” at all, but find home-cooked meals and no property maintenance as a way to – as one potential resident put it – “be footloose and fancy free.”

Century House also offers short-term stays for both seniors and family members who may live out of town, but be in the area visiting an elderly relative at another senior home.

Apart from creating safe, comfortable surroundings, allowing residents to keep as much of their independence as possible, McGuire reiterated, is the most important goal of the Century House.

“Family members tell us things like ‘we know mom is ready for some kind of help, but we don’t know to do’ They want them to be able to keep their independence as long as possible,” McGuire said, noting that while the Century House staff is highly attentive to residents, it is not a medical staff. “And we have been told of times when (a Century House resident) is visiting a family member and says ‘I think I’m ready to go home.’ That is when we know we have done our job.”

For more information on Century House, contact McGuire at 330-337-3697 or email centuryhse@att.net.