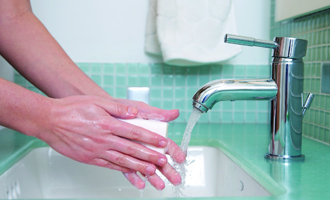 BALTIMORE — It makes sense: You need some exposure to bacteria to develop a stronger immunity to them in the long run.

But that runs counter to today’s uber-clean, antibacterial-everything consumer demands. Now, researchers are saying that exposure to common antibacterial chemicals and preservatives found in soap, toothpaste, mouthwash and other personal-care products may make children more prone to a wide range of food and environmental allergies. The researchers caution the findings do not demonstrate that antibacterials and preservatives themselves cause the allergies, but instead suggest that these agents play a role in immune system development.

Using data from a national health survey of 860 children 6 to 18, Johns Hopkins Children’s Center researchers examined the relationship between a child’s urinary levels of antibacterials and preservatives found in many personal-hygiene products and the presence of IgE antibodies in the child’s blood.

IgE antibodies are immune chemicals that rise in response to an allergen and are markedly elevated in people with allergies. “We saw a link between level of exposure, measured by the amount of antimicrobial agents in the urine, and allergy risk, indicated by circulating antibodies to specific allergens,” said lead investigator Jessica Savage, an allergy and immunology fellow at Hopkins.

The investigators say their findings are also consistent with the so-called hygiene hypothesis, which has recently gained traction as one possible explanation behind the growing rates of food and environmental allergies in the developed world.

The hypothesis suggests that early childhood exposure to common pathogens is essential in building healthy immune responses. Lack of such exposure, according to the theory, can lead to an overactive immune system that misfires against harmless substances such as food proteins, pollen or pet dander. “The link between allergy risk and antimicrobial exposure suggests that these agents may disrupt the delicate balance between beneficial and bad bacteria in the body and lead to immune system dysregulation, which in turn raises the risk of allergies,” Savage added. Allergy indicators. In the study, those with the highest urine levels of triclosan — an antibacterial agent used in soaps, mouthwash and toothpaste — had the highest levels of food IgE antibodies, and therefore the highest allergy risk, compared with children with the lowest triclosan levels. Children with the highest urinary levels of parabens — preservatives with antimicrobial properties used in cosmetics, food and medications — were more likely to have detectable levels of IgE antibodies to environmental allergens like pollen and pet dander, compared with those with low paraben levels.

The team initially zeroed in on seven ingredients previously shown to disrupt endocrine function in lab and animal studies. These compounds were bisphenol A — found in plastics — and triclosan, benzophenone-3 and propyl, methyl, butyl and ethyl parabens, found in personal-hygiene products and some foods and medications.

Interestingly, triclosan and propyl and butyl parabens, all of which have antimicrobial properties, were the only ones associated with increased allergy risk in the current study, the researchers noted. “This finding highlights the antimicrobial properties of these agents as a probable driving force behind their effect on the immune system,” said senior investigator Corinne Keet, an allergist at Johns Hopkins Children’s Center. Children with the highest urine levels of triclosan had nearly twice the risk of environmental allergies as children with the lowest urinary concentrations. Those with highest levels of propyl paraben in the urine had twice the risk of an environmental allergy. Food allergy risk was more than twice as pronounced in children with the highest levels of urinary triclosan as in children with the lowest triclosan levels. High paraben levels in the urine were not linked to food allergy risk. To clarify the link between antimicrobial agents and allergy development, the researchers are planning a long-term study in babies exposed to antibacterial ingredients at birth, following them throughout childhood.