XENIA, Ohio — A semitruck and trailer overturned June 8 in Greene County, letting as many as 2,200 piglets loose along U.S. Route 35.

The vehicle was driven by Terry Alley, of Lafayette, Indiana, and was hauling the piglets from North Carolina to Indiana, according to the traffic crash report. He was cited for failure to control.

According to the crash report, the accident occurred on the U.S. route 35 bypass, approaching the on-ramp to U.S. 35 West.

There was discrepancy over how fast the vehicle may have been traveling.

According to the report, the driver stated that the speedometer was not working properly, but believed he was traveling about 65 mph. The speed limit, according to the crash report, was 55 mph.

A passenger in the semi, Jillienne Landry, was transported by ambulance to Miami Valley Hospital. The truck was owned by Rinker Transport, of Dunkirk, Indiana.

Law enforcement and emergency personnel, along with local volunteers and farmers, worked to capture the loose pigs, and had recovered about half by the following day.

The captured piglets were then transported to the Greene County Fairgrounds, to be picked up by the company that was hauling them.

Beegle said the semi rolled over an embankment and clipped a guardrail, taking out several posts and a light pole before coming to a rest on its side. 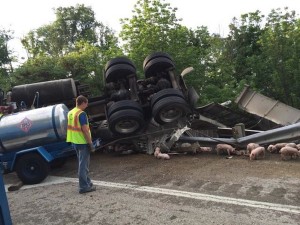 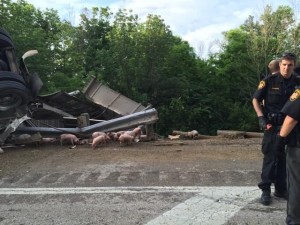