LANSING, Mich. — The Michigan Department of Agriculture has confirmed the presence of brown marmorated stink bug, Halyomorpha halys, in Michigan. This is the first confirmation of this pest in the state.

The identity of two specimens — one from Berrien County and the other from Eaton County — were collected by Michigan State University students and verified by USDA entomologists in late January.

The brown marmorated stink bug can be a serious pest of a variety of fruits, vegetables, field crops, and ornamental plants. In its native range, it feeds on a wide variety of host plants. It has also been reported on many ornamental plants, weeds, soybeans and beans for human consumption.

Feeding on tree fruits such as apple results in a characteristic distortion referred to as “cat facing,” that renders the fruit unmarketable as a fresh product.

Brown marmorated stink bug is native to eastern Asia and was first discovered in the U.S. in Allentown, Pa., in 1998. Since then, it has spread quickly and now inhabits most eastern states, as well as California and Oregon. 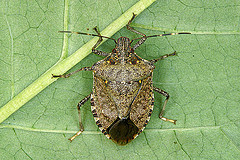 Adults are approximately 17 millimeters long and are shades of brown on both the upper and lower body surfaces. They are the typical “shield” shape of other stink bugs, almost as wide as they are long.

To distinguish them from other stink bugs, look for lighter bands on the antennae and darker bands on the membranous, overlapping part at the rear of the front pair of wings. They have patches of coppery or bluish-metallic colored punctures (small rounded depressions) on the head and pronotum.

The name “stink bug” refers to the scent glands located on the dorsal surface of the abdomen and the underside of the thorax.

“Pesticide treatments are not recommended because they will not prevent additional invasions.”