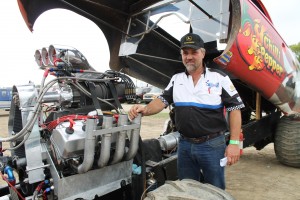 WAKEMAN, Ohio — As a boy, Mike Summers used to pour oil down the exhaust of his garden tractor to make it smoke and drive it around with the hood off so it looked more powerful.

Neither thing added to the tractor’s performance, but it gave Summers, who now pulls professionally on the national and Ohio Tractor Pullers Association circuits, a feel for something big.

Summers, 49, had an interest in pulling since he was 8. He raced motocross when he was in high school and started pulling trucks in 2006.

It didn’t take the Erie County puller long to be successful. He finished fifth his first year of pulling at the nationals in Bowling Green, and in 2009 and 2010 he was runner-up in the grand nationals. Last year, he topped all honors by winning the Grand National Championship with his super modified four-wheel drive trucks “Twisted” and “Chili Pepper.”

He’s a little behind in the standings this year, because he got a late start due to his main job — an excavator and owner of D & M Earth Moving. But he won his first three times out, and there’s still a few late-fall pulls to come.

Summers affirms what a lot of people already know about pulling — it’s an expensive hobby.

He’s lucky to win enough to cover repairs to the engine, which usually has to be taken apart and rebuilt every year.

“If you don’t blow something up and totally destroy an engine — the normal wear on parts — you can win enough to support that part, but never all of it,” he said.

There are many ways to spend your money, and for Summers, it’s through pulling.

When he’s not pulling or working on the truck, he spends time collecting antique tractors. His family recently put together a display of 44 tractors at his business. He goes to some pulls early, so he can walk around the fair and look over the antiques.

His mother, Sally, is an important part of his pulling team. She travels to most pulls and helps with some of the lighter things — “a polish here and a polish there –” as she puts it.

“He’s never asked me for a penny,” she said. “Luckily, he’s always been a worker, so he manages.”

At times, the pulling team consists of a dozen members, including Summers’ girlfriend, Vanessa, and two of Mike’s cousins — Matt and Mike Finnegan.

Summers gets some help from Mark Cook Racking of Wakeman, but the rest of the work is done by family — often at late hours and into the night.

“You need time on your hands and you need lots of people that are into it and willing to stick with you and make it happen,” he said. “Especially when something’s broke and you’ve got an event the next day. Sometimes you’re up part of the night getting (repaired).”

Always improving. Even if things are going well, and he’s winning, he still has to keep up on the new technology and ways to make his truck better.

“You’ve got to constantly be looking for something coming loose or something wearing or threads coming out on a blower belt … you only get one chance,” he said.

Summers said pulling is “a good family sport” and other pullers will loan each other equipment if needed.

There are no secrets as to what the tire tread looks like or the outside of the engine — because everyone can see those things. But lips are tighter when it comes to what’s inside the engine and drivetrain, and how it’s geared.

“You’ve got to be careful when you open your mouth,” he said. “If you find something that works, you want to keep it a secret as long as possible.”

Summers is mostly self-sponsored. He bought his trucks from other pullers, but had to learn on his own how to take care of them and make changes.

“I knew I had something good to start with, but the minute you take that thing apart, you’re on your own,” he said. “It’s not what it was when you got it from that guy. You’ve got to prove that you can put it back together and you can update it.”

To future pullers, especially youth, he encourages them to be persistent.

“There’s lots of farm kids out there that would die to have this opportunity and all I’d like to say is work hard, don’t give up on thinking of ways to make it happen and be determined and sooner or later that opportunity will be there and you’ve got to go for it,” he said.