According to the Ohio Department of Natural Resources, there were 20 permits issued in Monroe County, which was the most in the state.
In Salem Township, five permits were issued to Eclipse Resources, and three to Statoil USA Onshore Property.

In addition, four permits were issued in Washington Township to Gulfport Energy Corporation; three in Adams Township to Eclipse Resources, and three in Ohio Township to Statoil USA Onshore Property as well as one in both Switzerland Township to CNX Gas Co. and one in Seneca Township to Antero Resources Corporation.

The ODNR report shows there are now have been 204 permits issued in Monroe County since the shale boom began.

As of July 31, the county has 48 producing wells and 119 drilled wells awaiting infrastructure before they can begin producing. 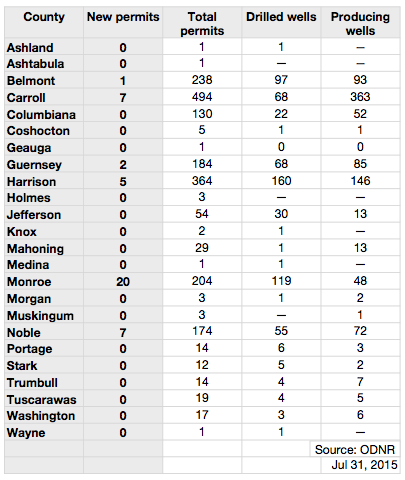 The ODNR issued seven new permits during July in Noble County. The permits were issued to Antero Resources Corporation, with six issued in Beaver Township and one in Enoch Township.

Two new permits were issued in Guernsey County to PDC Energy for a well site in Wills Township. As of the end of July, the ODNR has issued 184 permits for Utica shale wells. According to the ODNR, there are currently 85 producing wells in Guernsey County and 69 drilled wells.

A single permit was issued in July to American Energy Utica for a well to be drilled in Belmont County’s Wheeling Township, according to the ODNR. The monthly report shows there are now 238 total permits issued in Belmont County with 93 wells producing and 97 wells reported as having been drilled.

Since the shale boom began, the ODNR has issued 1,982 permits for horizontal drilling in the Utica shale and 1,564 wells have been drilled. There are currently 20 rigs drilling in Ohio.

The Pennsylvania Department of Environmental Protection issued 128 permits during July and 1,259 since Jan. 31, 2015. The DEP reported there were 98 unconventional wells drilled during July.
Here is a breakdown of the number of permits and wells drilled in the counties closest to the Farm and Dairy circulation area:

So far this year, the DEP has issued 28 permits, of which 21 were for new wells and seven were for permission to drill deeper in existing wells. The DEP reported there were five shale wells drilled in July in the county.

The DEP issued two new permits in Beaver County during July. So far, the DEP issued 25 permits this year, of which 20 were for new wells and five were for permission to drill deeper.

There were no new permits issued by the DEP in July for new wells to be drilled. And, according to the DEP, there were no wells drilled so far this year. The permit count in Lawrence County remains at 20 and in Mercer County, 13.

Tyler County in West Virginia appears to be a hot spot for drilling in the Marcellus Shale. The West Virginia Department of Environmental Protection issued 15 new permits in Tyler County during July. Nine of the permits were issued to Antero Resources Corporation on three different properties. The remaining six permits were split between the Stone Energy Corporation and Statoil USA Onshore Properties Inc.

Another hot spot for drilling appears to be in Marshall County, where nine permits were issued in July by the Department of Environmental Protection. The DEP issued seven of the permits to Chevron Appalachia on two different properties.

The West Virginia DEP issued single permits in Ohio and Wetzel counties, both to the SWN Production Company