SALEM, Ohio — Harrison County is leading the way for the number of Utica shale permits issued in the state of Ohio.

The Ohio Department of Natural Resources issued a total of 34 new permits for Utica shale wells in Ohio during the month of February.

The other township that appears to be heating up with gas and oil activity is North Township. Five permits were issued there and all of them were issued to Chesapeake Exploration, LLC. for drilling on two separate properties. 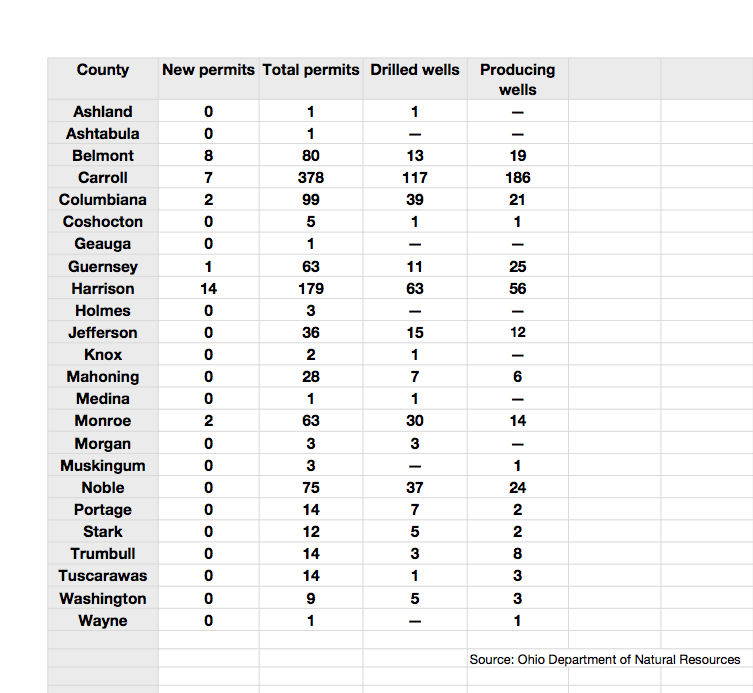 In Columbiana County, there were two permits issued by the ODNR. The permits were issued to Chesapeake Exploration for one well site in Butler Township.

The ODNR has issued a total of 99 permits for Columbiana County so far. There are 21 producing wells and 39 drilled wells awaiting infrastructure such as pipelines or compressor stations to get the product to the market.

Meanwhile in Monroe County, there were two permits issued for one well site in Seneca Township. ODNR issued the permits to the Antero Resources Corporation. There are currently 63 permits in Monroe County. According to the ODNR, there are 30 wells drilled and 14 producing wells.

According to the ODNR, there are now 1,099 total Utica shale horizontal permits issued in Ohio. So far, 747 wells have been drilled. At last count, there were 40 drilling rigs in Ohio.

The CNX Gas Company, LLC. was issued a permit to drill a Marcellus shale well in Monroe County, according to the ODNR. The well will be located in Switzerland Township.

In Pennsylvania, the Department of Environmental Protection issued 201 unconventional gas well permits during the month of February. The DEP also reported there were 57 wells drilled.

Susquehanna County led the state with the highest number of new permits issued. Susquehanna and Bradford counties are credited with starting the shale boom several years ago. There were 46 permits issued for new well sites in February. According to the DEP, there were five wells drilled.

In Bradford County, there were 35 new permits issued and eight wells were drilled, according to the DEP.

The DEP reported there were 39 well permits issued in Washington County throughout February. Of those 39, 24 were for new wells and 15 permits were issued to allow drillers to dig deeper into the ground. There were 10 wells drilled in February, according to the DEP.

In Lawrence county, there was one permit issued and two wells drilled.

Drilling into the Marcellus shale also started moving forward in West Virginia during the month of February.  A glimpse at the counties in the Farm and Dairy readership area shows how fast shale drilling is progressing.

In West Virginia, the Department of Environmental Protection, issued six permits for Marcellus shale wells in Marshall County. The permits were issued to Chesapeake Appalachia, LLC. (a subsidiary of Chesapeake Exploration, LLC.) and Noble Energy, Inc.

In Wetzel County, a permit was issued to HG Energy, LLC. The property is owned by the West Virginia Department of Natural Resources.

Five permits were issued to the Antero Resources Corporation for one well pad on property owned by Forest and Brenda Moore.

Another five permits were issued to Antero Resources Corporation for one well pad on property owned by the Coastal Lumber Co.

The remaining three permits were issued to Jay-Bee Oil and Gas for a well pad on property owned by George and Joann Woodburn.