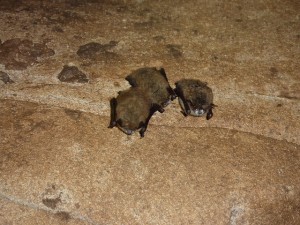 MAMMOTH CAVE, Ky. — A bat from a cave in Mammoth Cave National Park has been confirmed with white-nose syndrome, a condition deadly to bats.

“It grieves me to make this announcement,” said Sarah Craighead, Mammoth Cave National Park superintendent. “A northern long-eared bat, showing symptoms of white-nose syndrome, was found in Long Cave in the park. The bat was euthanized on January 4 and sent for laboratory testing. Those tests confirmed white-nose syndrome.”

Long Cave, an undeveloped cave 1.3 miles long, is the park’s largest bat hibernaculum and houses endangered Indiana bats and gray bats, along with other non-threatened species. Long Cave is not connected to Mammoth Cave and has not been open to visitors for more than 80 years.

Tours of Mammoth Cave will continue.

White-nose syndrome is known to be transmitted primarily from bat to bat, but spores of Geomyces destructans, the fungus that causes white-nose syndrome, may be inadvertently carried between caves by humans on clothing, footwear and caving gear.

White-nose syndrome is not known to affect people, pets or livestock but is harmful or lethal to hibernating bats, killing 90 percent or more of some species of bats in caves where the fungus has lasted for a year or longer, according to the U.S. Fish and Wildlife Service.

White-nose syndrome was first detected in New York State in 2006 and has killed more than 5.5 million cave-dwelling bats in the eastern third of North America as it has spread south and west.

Decontamination procedures to prevent spread of the fungal spores by human beings were adopted more than two years ago as white-nose syndrome was decimating bat populations in the northeast. Mammoth Cave National Park implemented such procedures years ahead of any actual discovery of white-nose syndrome in the park, in an effort to delay its arrival and to be fully prepared should it appear.

Craighead said Mammoth Cave National Park is part of a multi-agency — state, federal and tribal — effort to study white-nose syndrome and take steps to prevent people from spreading it further.

“About 400,000 people tour Mammoth Cave each year,” said Craighead, “providing an excellent opportunity for us to educate the public about the importance of bats and the disease. We screen all visitors before they go on a cave tour and visitors walk across decontamination mats as they exit their tours.”

Mammoth Cave’s White-Nose Syndrome Response Plan was written in collaboration with several National Park Service parks and offices, as well as the Kentucky Department of Fish and Wildlife Resources and the U.S. Fish and Wildlife Service.

The plan addresses continued operation of cave tours and limited research with decontamination procedures to minimize the spread of white-nose syndrome into and out of park caves.

There are more than 400 caves within the park, including the 390-mile long Mammoth Cave. All park caves are closed to human access except via ranger-led tours or by research permit. Cave tours travel through 12 miles of Mammoth Cave. A portion of Mammoth Cave extends outside the park boundary and the Mammoth Cave System watershed stretches as many as 20 miles to the south and east of the park.

“Because we suspected white-nose syndrome was coming, we partnered with various researchers to gather baseline data on bat populations and bat ecology,” said Craighead.

“The data provide important information on which bat species are present and how many, when they give birth, and when they feed. We now have five years of data collected prior to the arrival of white-nose syndrome, and will continue monitoring through the course of the disease.”

Bats play a key role in the food chain. In caves, for example, bat guano is a food source for animals that spend their entire lives underground. In forests and farm fields, bats play an important role by consuming enormous numbers of damaging insects such as beetles and moths. The number of North American bats estimated to have died from white-nose syndrome thus far had the capacity to consume up to 8,000 tons of insects per year according to the United States Geological Survey.