WASHINGTON — The remains of two unknown USS Monitor sailors, recovered by NOAA and the U.S. Navy in 2002 from the ship’s gun turret, were buried March 8, with full military honors, at Arlington National Cemetery.

USS Monitor sank in a New Year’s Eve storm just over 150 years ago, carrying 16 crew members to their deaths.

“Just as the crew of the Moitor fought tirelessly to keep their ‘old-time knight in armor’ afloat, so have many worked tirelessly since her loss to keep their commitment to her, and to the 16 sailors who answered the call-to-arms of a young nation in peril, and paid the ultimate price,” said Kathyrn D. Sullivan, Ph.D., acting undersecretary of commerce for oceans and atmosphere, in remarks at the memorial service.

“One major step toward that was taken some 40 years ago, when the nation designated the place where Monitor lies as America’s first National Marine Sanctuary, marking it forever as a place of special national significance.”

As keepers of the USS Monitor National Marine Sanctuary, NOAA is committed to protecting the final resting site of this ‘little boat’ and her crew, and to “assuring that the memory and the legacy of the Monitor and her crew are preserved and passed on to future generations,” she added.

The service was attended by members of Congress, the military and family members descended from the original USS Monitor crew.

The formal military services included a traditional caisson carriage procession to the grave site. The site sits adjacent to the memorial for NASA astronauts killed in the explosions of the Challenger and Columbia space shuttles.

NOAA and the Joint POW-MIA Accounting Command in Hawaii worked for 10 years to try to identify the sailors including trying to match DNA of family descendents with that from the recovered remains. Last year, NOAA released forensic reconstructions of the sailors’ faces, showing what they may have looked like while aboard the ship.

Neither effort has resulted in identification of the remains to date but efforts are ongoing.

For more than a quarter of a century, NOAA has forged and maintained a bond to the legacy of USS Monitor and its crew. In addition to trying to identify the two sailors, NOAA has carried out numerous research expeditions at the site, including working with the Navy and other partners to recover important artifacts.

The Monitor battle, fought 151 years ago, was the first time iron-clad ships clashed in naval warfare, signaling the end of the era for wooden ships, said Secretary of the Navy Ray Mabus.

“While Naval tradition holds the site of a shipwreck as hallowed ground and a proper final resting place for sailors who perish at sea, this ceremony pays tribute not only to the two sailors being interred, but to all who died when Monitor sank so many years ago during the Civil War.”

The area around the shipwreck became the first National Marine Sanctuary in 1975.
Since then, research at the Monitor site has focused on documenting the wreck in detail and understanding how it has been affected by natural deterioration and human activities. 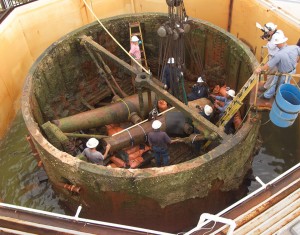 Many of the iconic Monitor artifacts were recovered — including the rotating gun turret — and are being housed and displayed at The Mariners’ Museum in Newport News, Va.

The engagement marked the first time iron-armored ships clashed in naval warfare and signaled the end of the era of wooden ships. Less than a year later, while being towed to a new field of battle, USS Monitor capsized and sank 16 miles south of Cape Hatteras, N.C., in 240 feet of water.

To date, no trace of the other 14 missing members of the crew has been found.