(Scroll down to see more photos from Ag Progress Days.)

ROCK SPRINGS, Pa. — Pennsylvania’s leaders agree the state of the Commonwealth’s agriculture is strong and they are willing to fight to keep it that away.

The group held a public forum on the state of agriculture in Pennsylvania Aug. 13 at Ag Progress Days. 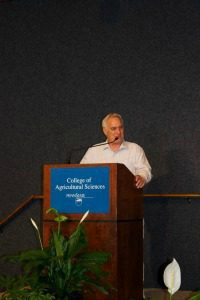 Greig reminded the crowd that Pennsylvania is in the top 10 of many agriculture commodities, including being first in mushroom production and fifth in dairy production.

He said another reason agriculture remains the state’s number one industry is location. Being near the Washington D.C., New York and the Eastern Seaboard markets make it possible to get Pennsylvania’s agricultural products to large populations.

Corbett said one of the most important things to keeping the family farm around has been the elimination of the inheritance tax.

“The elimination has meant keeping farms in the family,” said Corbett. 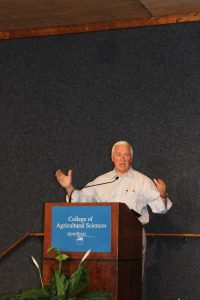 One of Corbett’s goals has been to keep regulations from the U.S. Environmental Protection Agency reasonable to landowners and farmers, so farmers can keep doing what they need to without government interference or higher costs.

Sec. Abruzzo said farmers have been improving their handling of manure and nutrient management especially around the Chesapeake Bay region, which is now mandated.

But, he added, it is important for officials to understand what farmers go through in order to work in agriculture.

“The government should be solving problems, not making them,” Abruzzo said.

Thompson, the only Pennsylvania congressman on the agriculture committee, said he has been working toward alleviating the volatility of milk prices. He feels changes to dairy pricing have made a difference and the prices have been more stable.

One of his goals in the 2014 farm bill was to ensure dairy farmers were able to use risk management services in order to handle their lines of credit and other debts they encounter in down years.

Greig said his vision was to meet the half million acre mark for farmland preservation in Pennsylvania and the state is on track to complete the goal.

“The farmland preservation program and the lack of an inheritance tax makes it a win-win for Pennsylvania agriculture,” said Greig.

A member of the crowd asked about bridge replacement and reconstruction in Pennsylvania. He asked why a template can’t be developed for certain sizes of bridges so the replacement process can be done faster.

Greig and Corbett agreed farmers need to be able to get their products to the markets and that has meant some changes in transportation policy.

Greig said there are to be 500 bridges scheduled for replacement in 2015. He said they are looking for templates (for example, a 100-feet bridge) so the time for engineering and costs can be cut.

One other topic discussed was the implementation of the Food Safety Modernization Act, which was signed into law in 2011. Thompson said he is working to ensure any new regulations are workable and affordable.

“We are looking seriously at the act,” said Thompson.

He said Congress and the Food and Drug Administration need to approach the act with common sense and he would like feed back on what is working in it and what concerns farmers have about it.

Thompson said he knows it is important because it won’t just cover food sold at farmers markets or produce production, it also includes a section on what farmers can feed their livestock.

He said it is a big concern since so many cattle are being exported out of Pennsylvania, and the act needs to have common sense and reassure those purchasing the cattle from abroad that American food is safe.

To read more about what has been done to improve transportation laws for farmers, check out this link.