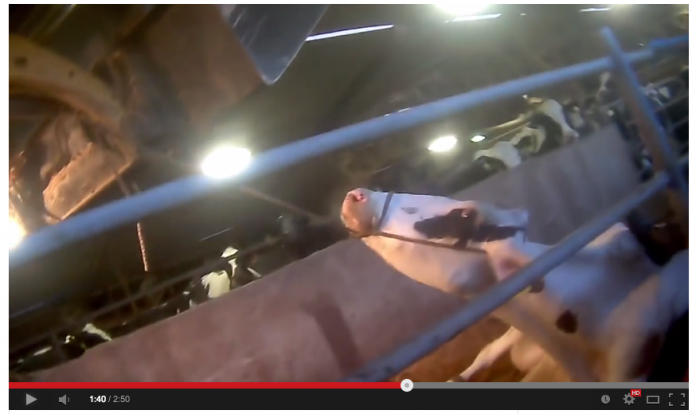 SALEM, Ohio — The jury is still out as to what might happen to Wisconsin farm workers who allegedly abused dairy cattle in a video released Nov. 26 by an animal rights organization.

However, a nationally recognized group of animal care experts has finished its own review and finds the actions in the video reprehensible.

The video, produced by Mercy for Animals, shows workers repeatedly striking downed animals, lifting them needlessly off their feet with a front-end loader and dragging them across concrete, apparently while still alive.

The events took place at the Wiese Brothers Farm, about a half-hour south of Green Bay.

The panel was created by The Center for Food Integrity and is comprised of a independent group of specialists.

“There’s nothing defendable in the video,” Reynolds said. “The cows are under stress, certainly in fear and probably in pain. The animals are clearly being abused.”

The panel was particularly bothered by the “systematic” nature of the events in the video, which appear to be repeated, and possibly widespread.

“What takes place in the video appears to be systematic,” said Reynolds. “For example, they’re all using the same type of coiled rope to repeatedly strike the animals. It appears to me that the employees seen in this video are doing what they were taught to do.”

Anthony said the underlying reason for the abuse should be investigated immediately.

“Is it lack of training, poor or inadequate farm management, or blatant cruelty? It is important to find out just how long these workers have been using these techniques and how widespread is their employment.”

The farm owners produced a statement following release of the video, in which they said they are “shocked and saddened to see a few of our employees not following our farm’s policies for proper animal care. We have zero tolerance for animal abuse.”

The farm said two employees were terminated and a third was removed from animal handling responsibilities. The farm also named three of its employees as “specialists,” who will now oversee the care and handling of any cow unable to get up.

The farm also says it is reviewing its overall animal handling policy, and making sure it’s up to date.

Meanwhile, the farm has lost a major buyer of its milk. Wiese Brothers Farm had been a supplier of milk that went into the popular DiGiorno Pizza chain. Following release of the video, DiGiorno Pizza, which is owned by Nestle, said it will no-longer accept milk from the farm.

“Nestlé is outraged and deeply saddened by the mistreatment of animals shown in this video,” the company said in a statement to media.

Grandin, who is perhaps the most nationally recognized member on the panel, said the farmers’ treatment of the downed animals was unacceptable.

“If an animal won’t get up you need to just walk away and come back later,” she said. “It just might be able to get up if you give it some time. But you certainly don’t use a machine to inappropriately lift it up in the air and you don’t drag animals with a chain.”

The following is a list of the panel’s key conclusions based on what they saw in the video:

The panel also asks the following questions be answered: