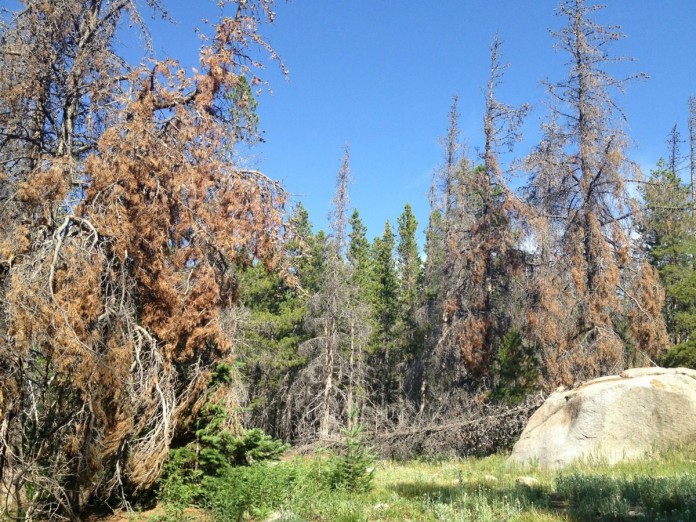 GOLDEN, Colo. — Trees in mountains across the western U.S. are dying, thanks to an infestation of bark beetles that reproduce in the trees’ inner bark. Some species of the beetles, such as the mountain pine beetle, attack and kill live trees. Others live in dead, weakened or dying hosts.

In Colorado alone, the mountain pine beetle has caused the deaths of more than 3.4 million acres of pine trees.

What effect do all these dead trees have on stream flow and water quality? Plenty, according to new research findings reported this week.

“The unprecedented tree deaths caused by these beetles provided a new approach to estimating the interaction of trees with the water cycle in mountain headwaters like those of the Colorado and Platte Rivers,” said hydrologist Reed Maxwell, of the Colorado School of Mines.

As the trees die, they stop taking up water from the soil, known as transpiration. Transpiration is the process of water movement through a plant and its evaporation from leaves, stems and flowers.

The “unused” water then becomes part of the local groundwater and leads to increased water flows in nearby streams.

The research is funded by the National Science Foundation’s Water, Sustainability and Climate Program.

“Large-scale tree death due to pine beetles has many negative effects,” said Tom Torgersen, of NSF’s Directorate for Geosciences and lead WSC program director.
“This loss of trees increases groundwater flow and water availability, seemingly a positive,” Torgersen said.
“The total effect, however, of the extensive tree death and increased water flow has to be evaluated for how much of an increase, when does such an increase occur, and what’s the water quality of the resulting flow?”

The answers aren’t always good ones.

The new results show the fraction of late-summer groundwater flows from affected watersheds is about 30 percent higher after beetles have infested an area, compared with watersheds with less severe beetle attacks.
“Water budget analysis confirms that transpiration loss resulting from beetle kill can account for the increase in groundwater contributions to streams,” said Maxwell and scientists Lindsay Bearup and John McCray, of the Colorado School of Mines, and David Clow, of the U.S. Geological Survey.

“Using ‘fingerprints’ of different water sources, defined by the sources’ water chemistry, we found that a higher fraction of late-summer streamflow in affected watersheds comes from groundwater rather than surface flows,” said Bearup.
“Increases in stream flow and groundwater levels are very hard to detect because of fluctuations from changes in climate and in topography. Our approach using water chemistry allows us to ‘dissect’ the water in streams and better understand its source.”
With millions of dead trees, adds Maxwell, “we asked: What’s the potential effect if the trees stop using water? Our findings not only identify this change, but quantify how much water trees use.”

An important implication of the research, Bearup said, is that the change can alter water quality. The new results, she said help explain earlier work by Colorado School of Mines scientists.
“That research found an unexpected spike in carcinogenic disinfection by-products in late summer in water treatment plants.”

Where were those water treatment plants located? In bark beetle-infested watersheds.