Brookyln Farmer is a short film documenting the months of effort by Brooklyn Grange, a rooftop farming cooperative, to turn an empty rooftop in Brooklyn’s Navy Yard into a functional, and profitable, 2.5 acre rooftop farm. The new project has been called “the largest rooftop urban farm in the world.” Whether or not that’s the case, the farm project feels like a massive undertaking.

Early on, we’re introduced to Ben Flanner, Brooklyn Grange’s head farmer. As he stands atop the white, empty roof that will soon become a farm, he points to the taller buildings in New York’s skyline, “We will be visible from them, that’ll be a new thing for us,” he says.

It is a new thing for urban farms — recognition. Urban farmers have largely been marginalized by traditional agriculture in America’s heartland. Questions about whether or not urban farms can turn a profit underline an issue that’s difficult to overcome for the farms: being taken seriously.

In following Brooklyn Grange, Brooklyn Farmer sheds some light on the process, one that involves as much hard work and careful planning as any farm in the Midwest. The film gives viewers a candid view of what it takes to make an urban farm sustainable and profitable.

It’s hard work, but somebody has to do it.

Flanner embodies what many would expect an urban farmer to be. He’s a former professional who spent a couple years “crunching numbers.” He looks young. His face is covered in stubble. He takes his laptop to work. Is he an idealist? Maybe, but he’s in good company. 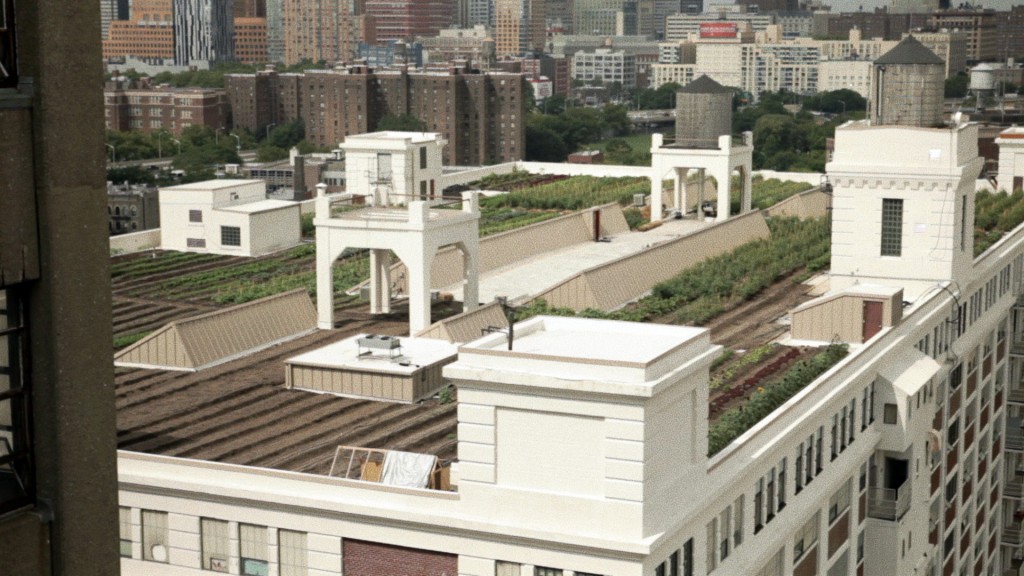 “It’s about the process.” Gwen Schantz, the farm’s chief operating officer says, “How can we take these big ideas, that are small in physical form, and make them expand?”

Schantz, who formally worked for the non-profit sector, is also young. She continues, “I wanted to do something that is beneficial to the environment and society.”

Flanner and Schantz represent a trend in farming: college-educated millennials leaving cubicles in favor of collards and kale. The New York Times reported on the phenomenon last year.  But, the urban farmers have more in common with their rural counterparts than you’d believe. The film demonstrates this with several, revealing scenes.

In Tyburski’s film, we see urban farmers take elevators to the fields, just as traditional farmers drive pickups to theirs. It’s the difference between stairwells and country roads.

Seeing vegetables growing within feet of roof-top air conditioning units drives home the point that this is a new way of doing things.

Sure, the film showcases some of the more than 40,000 lbs. of produce the farm produces each year, but Brooklyn Farmer also shows what it takes to get that produce to market, and it doesn’t romanticize a minute of it.

Farmhands snip greens, one at a time, during a rainstorm. Tension rises as the work on the new farm is slow, putting the planting behind schedule. Some of the plants show sign of stress, and the farmers worry about over-taxing their production as more CSA memberships come in.

But, don’t think Brooklyn Farmer is a roadmap, it’s not. Though viewers are given a behind-the-scenes look into how a rooftop farm comes together, we’re spared any real detail into planting techniques, marketing, finances or some of the other nitty-gritty details that viewers interested in starting an urban farm may find helpful.

Brooklyn Farmer is a documentary that’s more about the act of building an urban farm than it is about the growing of vegetables.

By the end of the documentary we’re left feeling happy for the farmers, especially after a visit by New York mayor Michael Bloomberg. Yet, some viewers may be left asking “so what?”

The film brings urban farming into a spotlight that makes it visible for everybody, not just those people sitting in the high-rises in New York City. It also adds credibility to the idea that urban farms can be profitable, if you know what you’re doing.