CHARM, Ohio — When you eat Guggisberg Premium Swiss cheese, you can honestly say you’ve had the best.

At least, according to the results of the U.S. Championship Cheese Contest, which presented this year’s top Swiss cheese award to Guggisberg Cheese, of Holmes County.

A banner inside the company’s retail store along state Route 557, near the community of Charm, boldly states: “Ohio, U.S. and World Champion cheese.”

Those are a few of the many awards this business has earned the past few years. This year, in addition to taking top Swiss in the nation, they also won grand champion cheese maker through the Ohio Swiss Cheese Association, and the company’s Baby Swiss line took top honors at the World Dairy Expo in Madison, Wis.

“We’re able to tell our customers that (they’re) purchasing the best Swiss in the United States, and that’s something we can back up by these awards,” said Ursula Bennett, the third generation to work for the family company.

Her grandparents, Alfred and Margaret Guggisberg, moved to the United States from Switzerland in the late 1940s and founded the Guggisberg Cheese Co. in 1950.

The company is located in a scenic valley region known to locals as Doughty Valley. The Guggisbergs also have a production facility in Sugarcreek, Ohio, and Middlebury, Ind.

Ursula’s father, Richard, serves as president. While awards are nice, he said the biggest thing is, they show the values of the employees and the brand.

Guggisberg Cheese is located in a competitive cheese-making region where there are at least a half-dozen other major cheese manufacturers.

The awards often change hands, and this year, Pearl Valley Cheese of Fresno, Ohio, finished a close second place, with its own Swiss. Pearl Valley traces its history to 1928, and its Swiss roots run deep.

But this year, and for the past couple, Guggisberg has secured the top spot.

Richard Guggisberg, who also is president of the Ohio Swiss Cheese Association, said there used to be as many as 40-50 major cheese makers in the area. Now, there’s only a handful.

Those who have survived have done so by becoming specialized or finding a niche market, he said. For the Guggisbergs, their niche is tied to their Swiss heritage and to the Swiss-like hills and farms that surround their store.

The first thing you notice when nearing their store is the chalet-style architecture, a popular Swiss feature. The storefront is ornately painted with a Swiss Alps mural, and you can spot a Swiss flag or two. 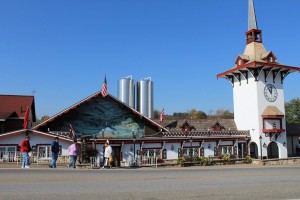 Across the street is a similar looking building, the Chalet in the Valley Restaurant. The restaurant opened in 1983 and specializes in Austrian and Swiss cuisine. It was Margaret Guggisberg’s vision to open a Swiss restaurant, and many of her recipes are on the menu.

“My grandma always dreamed of sharing her old recipes that she’s grown up with, with the public,” Ursula Bennett said. “She looked over at that land and was like ‘I think I’m going to make a restaurant.’ And she did.”

Margaret Guggisberg is retired from the daily grind of the business. But her house overlooks the company and “she still keeps her eye on everything,” Ursula said.

Of course, the Guggisbergs also found a niche with the Baby Swiss line — developed by Alfred Guggisberg in the 1960s. This type of Swiss features smaller holes and has a creamy, mild taste, making it a win-win for consumers.

The family’s two Ohio plants produce a combined 75,000 pounds of Swiss cheese a day. Altogether, the Guggisbergs use about 20 million pounds of milk a month, all trucked from area farms.

A good portion of their milk is from Amish farms, and most of it is from the rolling hills of Holmes County and surrounding communities.

That’s important, according to the Guggisbergs.For one thing, they support the local farmers, but they also give added value to milk produced from hill-ground — a feature believed to give the Swiss cheese its special flavor.

Richard Guggisberg said his father always believed the hills and mountains helped make a better kind of Swiss, because of the way that the hill minerals influenced the milk.

The Guggisbergs are cautious of the claims they make about their cheese, but what they can say is, it’s all-natural, and some kinds are lower-sodium and lactose-free.

And, their cheese supports local and statewide farmers. Holmes County is part of the state’s biggest dairy farming and dairy processing region.That means more competition among milk processors and milk-food manufacturers, but as Richard sees it, that’s a plus.

“I think competition for the milk is good for the farmers,” he said. “It creates an environment of higher milk prices and better return for the farmers. And it pushes us as an industry to create more value-added products so we (that) can pay those prices.”

He delegates his time among his three facilities, and they keep him busy. The Indiana plant is called Deutsch Kase Haus, which translates to German Cheese House. They make award-winning Colby cheese at that plant, and operate a retail store. The Sugarcreek, Ohio, plant is strictly production. Altogether the Guggisberg family employs more than 175 people.

And that’s “no small task,” Ursula Bennett said. “I credit (dad) for what he does every day.”

While the awards definitely tout the Guggisberg name, they also speak to what the cheese industry is doing. Its growth in recent years has caused cheese companies like Guggisberg to expand operations, and that means good things for farmers, too.

“We are displacing imports,” Richard Guggisberg said. “We’re keeping those dollars (and milk) in this country.” 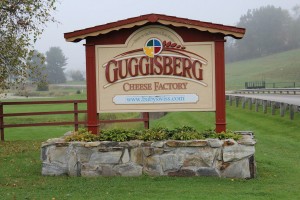 Guggisberg Cheese ranks among the top five U.S. Swiss cheese producers, and in addition to local stores, its products are sold nationwide and in popular grocery chains like Kroger and Giant Eagle.