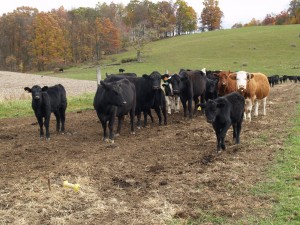 WEST LAFAYETTE, Ind. — High feed prices and large financial losses brought on by a combination of multi-year drought in the Southern Plains and the 2012 Midwestern drought will continue their stranglehold on the nation’s beef industry in the coming months, a Purdue Extension agricultural economist says.

According to the U.S. Department of Agriculture, September cattle placements onto feedlots dropped a sharp 19 percent compared with September 2011. July and August also were months of decline.

“Drought has been particularly cruel to the beef cattle industry,” Chris Hurt said. “Brood cows remain the last major livestock industry that is land–extensive. So when dryness causes wide stretches of land to be unable to support cow grazing, producers have to buy feed or send cows to town.”

High feed costs have caused feedlot managers to lose up to an estimated $200 per head, according to Kansas State University.

“U.S. beef cow numbers are likely to be 2-3 percent lower in the upcoming January inventory report,” Hurt said. “The mid-year estimates were already reflecting a 4 percent decrease in the national beef-cow herd, and that was before the impacts of the 2012 drought began to be felt. The implications are for continued cow reductions until feed and forage supplies are restored.”

While drought relief has come to the eastern Corn Belt and the Southeast, 62 percent of the lower continental U.S. is still covered by varying degrees of drought — especially in the beef cow rich central Great Plains and western states.

“As a result of the slowing placements in the past three months, the number of cattle on feed dropped to 3 percent below year-ago levels on Oct. 1,” Hurt said. “Cattle on feed will play a role in rationing the nation’s short corn supply.”

One ray of hope is that those beef producers able to endure the hard times could see cattle prices rise for the remainder of this year and into 2013. A drop in per capita beef supplies, combined with steady consumer demand, will drive prices higher.

Record-high cattle prices could be in store for 2013.

Calf prices won’t recover quite so quickly because high feed prices will continue to discourage feedlot managers from bidding up. That trend is likely to continue until feed prices fall a bit.

“That moderation in feed prices could begin in a small way with lower soybean meal prices in the spring of 2013, assuming reasonable South American soybean production,” he said. “Further declines in feed costs could occur with a better grazing season in the spring and summer of 2013 and a return to larger U.S. corn and soybean crops next year.

“A more abundant feed supply in the second half of 2013 could result in a robust price recovery for calf and feeder cattle prices.”