“We’re getting close, finally, after four years,” said Keith Schneider, a professor and food science expert with the University of Florida.

He spoke Jan. 19 at the Ohio Produce Growers and Marketers Association’s annual conference at Kalahari Convention Center, in Sandusky.

Schneider has been predicting the new rules would be just around the corner, for the past couple years. But there’s more reason now than ever, to believe the process is nearly complete.

The rules are part of the Food Safety and Modernization Act, which President Barack Obama signed into law Jan. 4, 2011. Since then, there have been multiple public comment sessions and revisions concerning the rules related to growing and handling fresh produce.

Now, FDA is taking public comments on the Environmental Impact Statement of the new rules — or the perceived impact they will have on the environment. That comment period includes a Feb. 10 public comment meeting, in College Park, Maryland, and will conclude around March 10.

Schneider said most growers are already doing the things they will soon be required to, and are more prepared than they know.

One of growers’ biggest concerns with the rule was that it previously required a nine-month minimum manure application interval, until harvest.

The FDA is extending its research to determine the most appropriate interval. Schneider said it’s his understanding that farmers can apply manure in even shorter intervals than the NOP standard, as long as they have scientifically verifiable data that show the application interval is safe.

Whenever the final rule is approved, farmers will still have several years to come into full compliance.

Those who sell less than $25,000 worth of produce a year will be exempt from the new law.

Very small farms, with sales over $25,000 and up to $250,000, would have four years following the effective date of the final rule, plus two more years (six total) to comply with certain water requirements.

Small farms, with sales over $250,000 and up to $500,000, would have three years, plus two more years (five total) to comply with certain water requirements.

Other farms, with sales greater than $500,000, would have two years, plus two more years (four total) to comply with water requirements.

“Literally, we’re going to be rolling this out until 2020,” Schneider said. “It’s not going to happen overnight.” 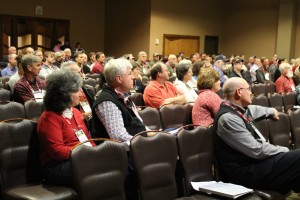 And, he said a potential change in the federal administration won’t make much difference.

“This is a nonpartisan issue,” he said. “It’s really a consumer-driven process that goes against party lines.”

Consumer-driven because the consumer is the one who gets sick when there is a food safety issue.

The FDA estimates that every year, 1 out of 6 people in the United States — 48 million people- — suffers from foodborne illness, more than 100,000 are hospitalized, and thousands die.

According to a January 2013 estimate, the new rules will prevent 1.75 million foodborne illnesses, with an associated benefit of $1.04 billion annually.

In a morning keynote address, Don Goodwin, of the produce marketing firm Golden Sun Marketing, updated producers about the “hot trends” in the produce industry.

One of the biggest is transparency. Like it or not, consumers want to know about the product they’re buying, where it came from and how it was grown, and whether it contains Genetically Modified Organisms (GMO’s).

Goodwin said studies show that mandatory GMO labeling will likely be a reality in the United States, sometime within the next 10 years.

“We’re not becoming less transparent, we’re becoming more transparent,” he said. “I ask you to accept the responsibility that consumers want to know.”

A major group of consumers who want to know are millennials. Goodwin described them as “food curious” people who want to try new things, especially things related to fresh and healthy.

He expects millenials to become the No. 1 purchasing power by about 2018, which means farmers and marketers will need to make sure they’re connecting with this market segment.

Another trend, he said, is a return toward smaller retail stores. For the past several decades, the trend has been one-stop stores like Wal-Mart, but in recent years, Goodwin said there’s been a resurgence in much smaller, 20,000-30,000 square-foot stores.

“We’re going to see more and more of this kind of growth in the country,” he said, adding that today’s consumer now purchases food and pantry items from 10 different locations in a month’s time.

During a talk on agriculture technology, Stan Ernst, OSU ag economics outreach leader, encouraged producers to know why they use the technology they do, and how that technology improves food from a consumer standpoint.

He said facts and research matter, but at the same time, “emotion” and how consumers feel about their food can be an even bigger factor.

He finds that consumers often are not opposed to new technology as much as they are how it’s applied.

“It’s not necessarily the technology issue,” he said. “What they’re really bent out of shape over is technology control.”

The OPGMA winter congress continued through Jan. 21, and included dozens of educational and training workshops. Learn more about the organization and upcoming events, including the summer tour and field day at www.opgma.org.