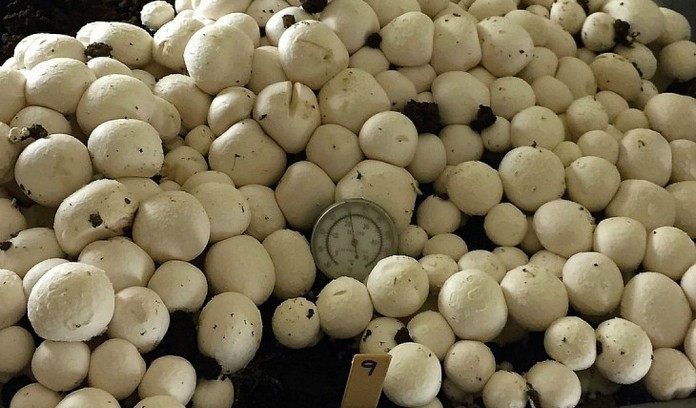 UNIVERSITY PARK, Pa. — The developer of a mushroom that is genetically modified to resist browning has received a “Best of What’s New” award from Popular Science magazine.

Each year, Popular Science reviews thousands of new products and innovations and chooses the top 100 winners across 10 categories for inclusion in its annual “Best of What’s New” issue, the magazine’s best-read of the year.

To win an award, a product or technology must represent a significant step forward in its category. Yang’s achievement received recognition in the Engineering category.

In April 2016, the U.S. Department of Agriculture’s Animal and Plant Health Inspection Service confirmed to Yang that the anti-browning mushroom he developed would not be subject to USDA approval. The notification apparently cleared the way for the potential commercialization of the mushroom, which is the first CRISPR-Cas9 gene-edited crop deemed to require no regulatory review by USDA.

Yang explained that unlike most GMO crops, which receive DNA from foreign organisms such as bacteria or other plant species, this mushroom is transgene-free thanks to the CRISPR-Cas9 tool, making it exempt from USDA oversight.

“Our genome-edited mushroom has small deletions in a specific gene but contains no foreign DNA integration in its genome,” said Yang, who is also an affiliate of Penn State’s Huck Institutes of the Life Sciences. “Therefore, we believed that there was no scientifically valid basis to conclude that the CRISPR-edited mushroom is a regulated article based on the definition described in the regulations.”

The resulting modification can delete or replace specific DNA pieces, thereby promoting or disabling certain traits. In this case, the gene editing reduces production of a specific enzyme that causes mushrooms to turn brown.

The end product is a mushroom with longer shelf life that resists blemishes caused by handling or mechanical harvesting — but without DNA from a foreign organism.

“This technology holds promise for precision breeding of crops with many desirable traits, such as low levels of food allergens or toxins, disease resistance, drought tolerance, and efficient nitrogen and phosphorous utilization,” Yang said.

“These agronomic traits not only help reduce pesticide, fertilizer and water usage, but also improve food quality and safety.”

In the long run, Yang noted, CRISPR-Cas9 could change the public dialogue about GMOs.

“There’s too much divisiveness and hostility between pro- and anti-GMO camps,” he said. “I hope development of the new technology will facilitate rational and productive dialogue among diverse groups of people, with a common goal to achieve food safety, food security, and agricultural and environmental sustainability.”

Yang is continuing to improve mushroom genome editing to optimize browning resistance and shelf life. He said the next step in possibly commercializing an anti-browning mushroom would be submitting it for review to the Food and Drug Administration.

Although legally not required, FDA approval is a prudent step to take prior to commercialization, according to Yang. “Before taking it to the market, it is essential to demonstrate scientifically that a gene-edited crop is as safe as conventional and organic crops.”

Featured in the November/December issue of Popular Science, Best of What’s New winners can be found online at www.popsci.com/best-whats-new.