ENON VALLEY, Pa. — Dennis Musser got the phone call while he was working on a tractor in his shop. It’s his custom chopper operator, and it’s a quick conversation. That five acres of the corn Musser planted this spring? It can’t be chopped. The custom operator says he simply can’t take the risk. The field is sinking and the custom operator won’t take his heavy machine over the field. This isn’t a nightmare, it’s reality.

Dennis and Betsy Musser, of Den Be Farm, in Enon Valley, Pennsylvania, signed a lease for limestone mining with the East Fairfield Coal Co./Subtropolis Mining Co. on their farm more than two decades ago. The mine has since closed and was basically out of sight, out of mind for the family dairy farm.

They were more preoccupied with making a profit with low milk prices, finishing the showing season at fairs and the All American Dairy Show in Harrisburg, and preparing for the wedding of their daughter Cassie.

In June, that all changed. The mine collapsed and took with it five acres of corn, a portion of their pasture and a hay field. 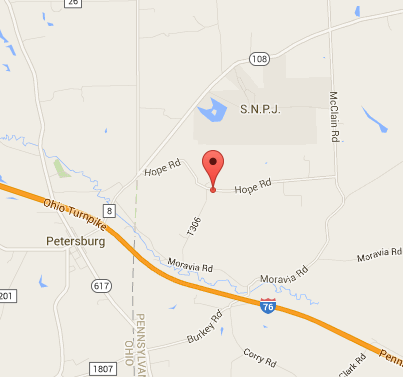 Musser hasn’t been able to get his five acres of corn chopped, apply manure because of the increased slope in the land or even make hay. 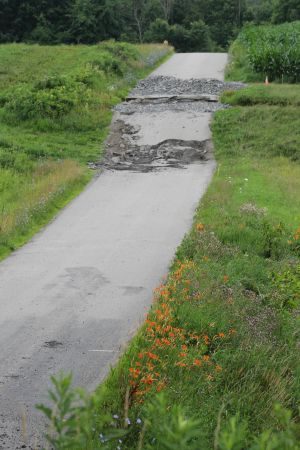 The limestone mine closed a little over a year ago, according to Ken Rambo, who is in charge of leasing, sales and public relations for East Fairfield Coal Co., which is based in North Lima, Ohio, and has been in business since 1934.

“This was totally unexpected,” said Rambo about the mining subsidence on Musser’s property.

According to Eric Heis, a public information officer with the Ohio Department of Natural Resources, surface mining began in 1996 at the mouth of the mine, which begins in Ohio and ends in Pennsylvania. The underground limestone mine began in 2000.The records at ODNR say that operations in the Ohio portion of the mine were put on hold shortly after the subsidence on the farm began.

The Musser farm isn’t the only property to be damaged. The road that runs through their farm, Hope Road, literally sunk in June. In the blink of an eye, part of their farm sunk with it. 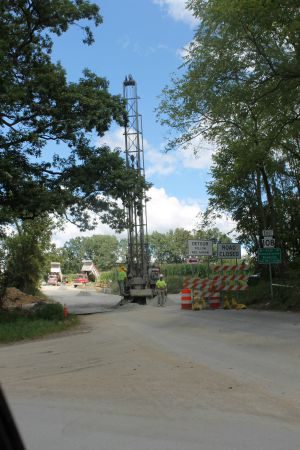 The coal company is working to repair state Route 108, which is currently closed after it sustained subsidence in June as well. It is expected to open for traffic by the end of August.

The company drilled 80 holes into the top of the mine on state Route 108, then dropped aggregate stone into the 200-foot holes, spread the stone with high pressure water and then finished by filling the holes with cement.

Rambo said he isn’t sure if this could be a solution for the Musser farm and said the decision is up to a consultant and geologist working on the problem. He added the coal company will be meeting with the Mussers and another landowner the week of Aug. 24 to present some options.

When the couple signed their lease, they had the understanding that the mining in the area wouldn’t be a problem for their farm. “They (East Fairfield Coal Co.) sat across the table and said it will never happen,” said Dennis.

The home farm where the 150 milking cows are housed has been in the same family since the Revolutionary War. The second part of the farm where the land has been damaged was purchased by Musser’s parents in the 1940s. “I wish I had never seen East Fairfield,” said Dennis. 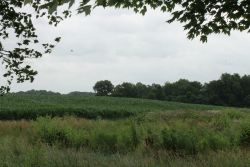 Out of 213 acres total, the Mussers believe between 60-70 acres have been impacted by the subsidence after the East Fairfield Mining Co. mined out the limestone. The fields continue to sink and the Mussers are wondering when it will stop.

In an interview with Farm and Dairy, Rambo said that before mining began under the property, a mining plan was submitted to the Pennsylvania Department of Environmental Protection and the Office of Mine Safety and Health at National Institute of Occupational Safety and Health. But a mine changes even after the mining process has stopped. In this case, the mine has been filling with water.

Rambo said a lot of water has entered the mine since its closing. The pillars in the mine, sitting on clay, became unstable due to the water, have shifted and pushed down into the clay. “It only takes two inches and we have a problem,” said Rambo. 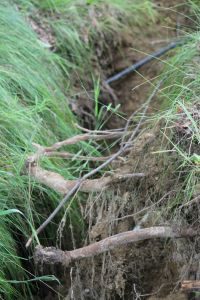 And the influx of water has been noted by the Mussers. They discovered water pouring out of holes in the ground when the ground subsided and they say they were told by mining engineers that the mine was filling up with water — and that it was a good thing because the water may help hold up the surface.

But that’s not reassuring for the dairy family who is trying to farm the shifting land.

The researchers also stated that modern limestone mines are designed to ensure the stability of the overlying roof rocks. However, it cannot be ruled out that isolated cases of old limestone workings mined several decades ago may deteriorate and fall, causing ground surface disturbances in the future. According to ODNR records, the area in Ohio near the mouth of the mine has not been mined. However, there were portions mined in Pennsylvania.

Dennis and Betsy said they talk to the DEP investigators every chance they get, but they never find out what is being done to stop the subsidence — or if anything can be done. And they say they have received little to no communication from the East Fairfield Coal Company as to what the future may hold.

The Mussers say that they knew the danger was always there, but felt reassured that it would never happen. And then it did.

Now, the Mussers are trying to run their dairy farm on acreage that has dwindled without warning, with no chance to plan for such a “nightmare,” as they call it.

“I feel like they don’t respect the land. It was all about the minerals,” said Betsy Musser as she moves the fence line once more to keep the cattle safe from the holes that keep appearing in the pasture. The Mussers have talked with attorneys, but have taken no action and yet their legal bills are beginning to mount.

The Pennsylvania Department of Environmental Protection had little comment on what is being done or if anything showed up in its investigation.

“The East Fairfield Coal Co. has been working diligently with highway officials and private property owners to mitigate surface subsidence problems that have resulted from their underground limestone mining operations.

“The DEP staff have an investigation in progress and have monitored East Fairfield’s efforts to not only remedy the surface effects of the mining operations but to find a solution to control future subsidence events,” said Melanie R. Williams, DEP community relations coordinator, in an emailed statement to Farm and Dairy.

Although the company and mouth of the mine is located in Ohio, the Ohio Department of Natural Resources has no control over the situation since the surface subsidence occurred in Pennsylvania. However, ODNR Mineral Resources Management has been investigating with the company both on the surface and in the mine at the location of the roof fall. 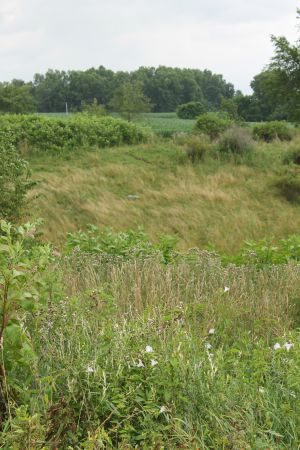 Jamal Rostami, who is part of the Center for Geomechanics, Geofluids and Geohazards at Penn State University, studies rock mechanics and ground control. He couldn’t comment on the specific situation in Lawrence County because he has not studied it, however, Rostami said what could have happened underground is that the pillars failed.

The pillars bear the load of the surface and if even only a few fail, it can cause a domino effect, with the failed pillar toppling onto another and another.

Rostami said there can be hundreds of pillars underground, but it only takes the failure of one or two to cause a great amount of surface damage.

He added that mines often have monitors hooked up to the mine once the mining operation has closed the mine. That way the company can notice changes that signal a collapse is coming, and possibly go back into the mine and shore it up to prevent subsidence. According to ODNR and Rambo, there were no monitors or electronic detection on the Petersburg limestone mine prior to the collapse.

Rambo said gravity forcing the surface to fall is the biggest problem at the Musser farm right now. “It’s not something we planned on happening,” said Rambo.

He said the company is working on the best solution possible, but it takes time. “We are at the mercy of circumstances beyond our control,” said Rambo.

He is confident that once the surface is done falling, a fix can be found and the ground can once again be used for agricultural work. “It can definitely be farmable again. It’s just going to take time,” said Rambo.

The company is not alone in its conclusion. According to the Office of Mine Safety and Health, once an area has subsided, further movements are highly unlikely because the mined-out void is closed up. Rambo said the lease contract states the company is responsible for reclaiming the land after the mining process and that is what the company is attempting to do.“It’s just a matter of finding what is the best solution for the farm, Hope Road and any other areas where the subsidence has occurred,” said Rambo.

Dennis wonders how a company can rectify what has been done to the land or if anything can even be done to correct what has happened. And Cassie, who loves the farm and her dairy herd, faces uncertainty about her plans to continue farming the same land as the six generations before her.

“This is my future, the farm’s future. What will it hold? Will I be able to farm this land?”