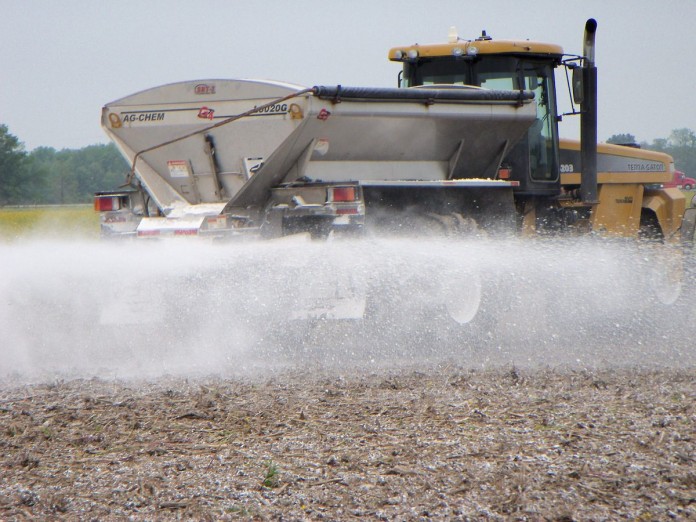 LONDON, Ohio — The nutrients farmers are applying on their fields are under a lot of scrutiny.

The amount of nutrient runoff, especially dissolved reactive phosphorus, is making its way into Ohio’s lakes and streams, leading to the growth of harmful algal blooms and causing serious consequences.

This has resulted in a multi-state effort to apply nutrients more responsibly. It also resulted in new legislation, including a rule that will require Ohio farmers to be state certified in three years, if they intend to apply fertilizer on more than 50 acres.

However, there is one nutrient — or mineral — that farmers are now applying that actually reduces the runoff of the others. And researchers say the soil needs more of it.

That mineral is gypsum, a moderately soluble source of two essential plant nutrients: calcium and sulfur.

When applied to the soil, this powdery white nutrient improves the physical and chemical properties of soil, which reduces soil and nutrient erosion, while also improving plant growth.

“It’s a good tool to promote water infiltration, which leads to soil quality and soil health,” said Joe Nester, agronomist with Nester Ag. “It’s a good product to sequester phosphorus and hold it within the boundaries of the field, so it’s (phosphorus) available for crop production.”

Nester spoke about the product during a news conference at the Farm Science Review, Sept. 16, alongside Ron Chamberlain, lead agronomist for Gypsoil, a brand of gypsum.

A study by Ohio State University showed a single application of gypsum on test sites in the Maumee River watershed reduced runoff of soluble reactive phosphorus by an average of 55 percent. The study is ongoing, and researchers expect results will continue to get better, as more gypsum is applied.

Warren Dick, a natural resources expert who leads Ohio State’s gypsum research, said farmers are starting to see the benefits — not only to their crops but also the environment.

“There was initially a lot of skepticism,” he said. “Now there is slow, but spreading, acceptance and acknowledgment that gypsum can provide real benefits.”

One of the biggest things gypsum does is reduce soil compaction (at the crusting stage) and increase water infiltration. When applied to the soil, gypsum neutralizes the chemical salts, which loosens the soil and allows more rain to infiltrate, rather than run off. 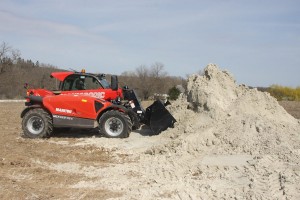 Gypsum is actually one of the oldest fertilizers used in the United States, according to an OSU bulletin, and has been used for more than 250 years. However, it is receiving renewed attention because of its conservation benefits, and because of an abundant supply.

Gypsum can be mined from the earth, however, in recent years, a large amount of gypsum has been collected from the inside of industrial flues — usually coal-burning flues — which are required to remove the sulfur from their emissions.

This type of gypsum is known as FGD gypsum — or gypsum that comes from “flue gas desulfurization.” The Gypsoil brand says its product resembles a powder that feels “damp to the touch, similar to slightly-moistened flour or biscuit baking mix.”

There is an abundant supply, partly because federal regulations require existing plants to do a better job of scrubbing and desulfurizing emissions.

Initially, most gypsum was used in non-agricultural uses such as the construction of wallboard, but the use is quickly shifting to include agriculture.

Still, researchers say there is more than enough gypsum to supply agriculture, and expect annual production of FGD gypsum will continue to increase.

In 2012, approximately 24 million tons of FGD gypsum were produced, according to the American Coal Ash Association. Only half of that was used across all sectors, and only 655,600 tons were used by agriculture.

The main problem, Dick said, is that gypsum is a bulky material and sometimes “the source and the place where it can best be used are not in sync.”

This decrease, according to an OSU bulletin about gypsum, is partly why some farmers are starting to see sulfur deficiencies in their crops.

Other reasons include the use of highly concentrated fertilizers that contain little or no sulfur, as well as intensive cropping systems and increased yields — which result in more sulfur being removed from the soil.

As with other soil amendments, farmers need to apply gypsum responsibly and based on accurate soil testing. Most farmers apply about 1 ton per acre, according to Gypsoil, but those rates can vary.

“Like anything else, too much of a good thing can actually be bad,” Dick said. “Farmers need to continue to soil test to make sure that continued gypsum applications do not lead to deficiencies in other elements.”

In general, he said crop consultants are recommending gypsum application to achieve about 75-80 percent of the cation exchange capacity represented by calcium.

Dick, who started his work at Ohio State in 1980, said gypsum has faced some of the same challenges as no-till farming, in that people were skeptical of both things at first, until they learned to manage the whole system. Then, they started to see the benefits.

Similarly, gypsum requires special care to use the right application equipment, and the right rates per field, but the results look promising.

Dick said researchers are studying the long-term benefits of gypsum, and will soon know more about all the benefits and how far they extend.